1960 With A Few Valve Train Issues

Got the ’60 out this weekend and have put about 100 miles on her including today. This morning we decided to do some errands using her and after 6 or 7 miles I told my wife that it seemed like it was skipping a little, my first thoughts, it wasn’t too bad and I kelp going. After about another 6 or 7 miles it was really getting bad and to the point that I would have to hold the pedal down a little because it seemed that it wanted to die. We didn’t shop but turned around and held our breath all the way back home about 15 miles and of course as we approached just about every traffic light it would turn red. Once it got to a certain point it didn’t get any worst but was really running rough. After we got home and pulled into the garage and I let off the pedal it immediately died. I checked to make sure all of the spark plug wires were still on and then I started it back up again. Considering the condition that it was running it did start up fairly good not as good as before but none the less it started up. To me it seems to be more of a fuel problem than an electrical one. I have attached a video and I know that it isn’t easy to tell what is going on but better than I can explain in words. At the end of the video when Shirley completely let off the pedal it again immediately died. Any thoughts? Any help will be greatly appreciated and I know that Shirley will be grateful. I told her that if I had to stop and have it towed that I would probably have to call an ambulance for her. Thank you in advance, Lamar After your reply I did a little checking on the tool and how to use it and as I did I came across this CT post https://www.chevytalk.org/fusionbb/showtopic.php?t... which linked this on the dirt forum http://www.thedirtforum.com/pushrodlengths.htm, this info is waaaay over my head. There is a Summit Racing about 45 miles from me and they have it in stock ready for pick up so I may just run down there Sunday after Church and pick it up. While I’m at it may as well pick up one of the adjustable push rods but not sure which one to get. As far as I can tell my pushrods are 5/16” x 7 13/16” (7.80?). I may try marking the valve stems on cylinder #1 with a black magic marker this evening, adjust the valves and rotate the engine over a few times to see what happens. In doing this would you just take the play out or go ahead and do the extra 1/2 turn? Lamar

After breaking in the cam, I changed the break-in oil and the odometer had 137952 on it (when I stopped driving it in 1968). Each time that I would take it out for a drive I would check the oil and each time it was fine so I just sort of stopped checking it. A few days before the car show that was on Oct. 19 & 20th, I put about 55 miles on it with a stop by a friend of mines to let him see the car and about the time I started to pull into his driveway I noticed a ticking sound. When I got up to his house, I opened the hood and it sounded like it was in the upper part of the engine, maybe a lifter. When I checked the oil, it was barely on the stick, heart stopping moment.

He took me to get some oil and it took 2 qts., when I started it back up the ticking was gone and it has done great ever since.

After I got home, I didn’t drive the car anymore until I could get the same oil that I had put in it after the break-in. I got the new oil and filter three days later and changed the oil and installed the new filter at 138708, that was 756 miles on the first oil. Used 2qts in 756m., but never have seen any smoke what so ever! I was told that a newly rebuilt engine would use oil until broken in. The following morning after the change and before I started it up, I checked the oil and with the new change the oil level on the stick was about 1/8” below the full mark. I drove it about 50+ miles on the next outing, to the car show and back, and the next morning it was about ¼” below the full mark. After the outing on last Friday and yesterday of about 50+ miles again the level this morning was almost 3/8” below the mark.
Gap is .035, I wire burshed the plugs, reinstalled them and no change. The oil on the intake: as I said I noticed it on the manifold after the leak on the carb and I would wipe it off after I got home after each drive because I thought that it was gas but didn't wipe it off this last time and when I did it seems to be oil but can't figure where it would be coming from, the intake bolts are tight.

Your other thoughts? Lamar 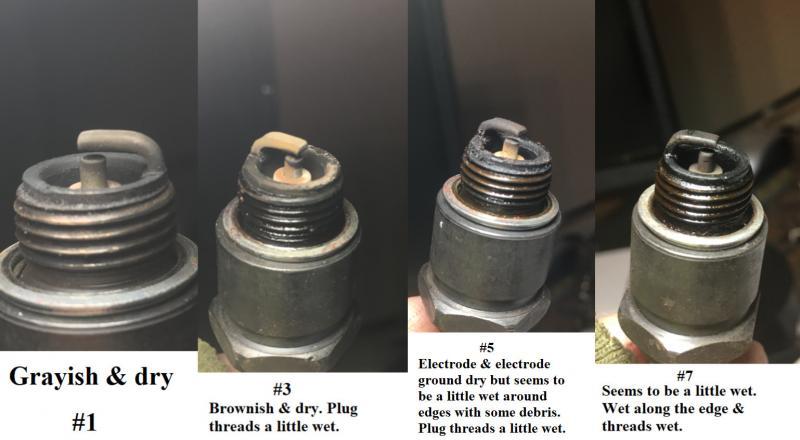 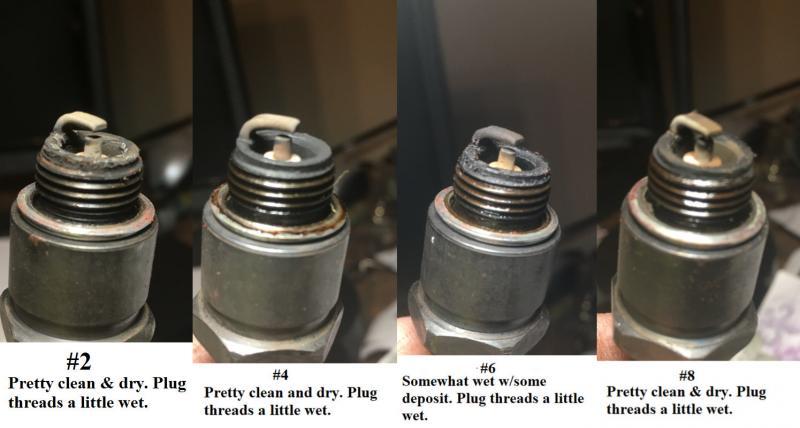 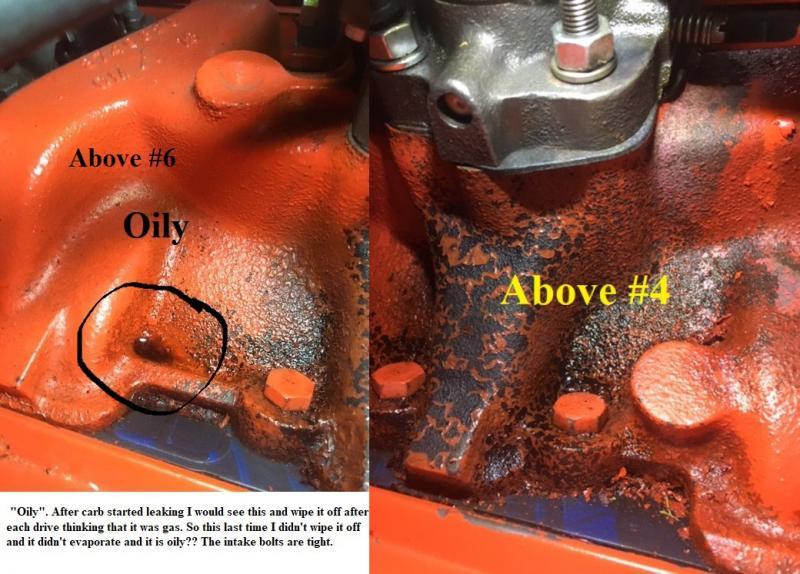 Ok, who wants to be the first to deliver some probably bad news?

Before trying anything else I decided to do a cylinder compression test just for heck of it. Started with #1 when I got to #7, I didn’t get any reading at all.

Finished the rest and came back to #7 still same results. Removed the tester hose and plugged the hole with my finger and Shirley turned the engine over and absolutely nothing. When I tested #5 with my finger it immediately pushed it away. Not sure what the pressure should be but in the shop manual it gave two different readings, #140 & #150. I also saw somewhere that it should be at operating temp which I couldn’t do. I haven’t tried anything else, just the compression test. Maybe the exhaust valve? Any ideas? Lamar

I said in my post on 11-7-19 that “I disassembled the engine had it vatted and it needed boring .040. The machine shop that did this also reworked the heads.” Now I’m not so sure of the heads being reworked because there are to many things that just doesn’t add up. I have a little less than 1000 miles on the engine and it is hard to believe that the rocker arm could have worn that much of a gap in the one stud in such short time. The stud next to it also was starting to get a gap in it as well. Also, the rockers on the valve stem end are worn. Another thing is that I have the receipts for the engine parts back in 1980 but I have yet to fine anything what so ever that has anything to do with the heads so I’m thinking that I just cleaned the heads up and reinstalled them.

When I removed the springs, I found that none of the umbrella seals were in place and most were up inside the spring so could this have been part of the oil consumption problem and oil on the spark plugs? After I got the springs off, I pushed a couple of the seals back on valve stems to see how they fit and there was no friction at all, they would just drop on. I used a borescope to watch the pistons come to TDC and I could see some deposits on top of them. I’m going to try and find a better scope because the image isn’t really that clear with the scope that I have.
I purchased a “Stud puller and Tap guide” and it came with 16 threaded studs. It wouldn’t go over two studs at the same time but worked great when I tapped the holes. Before I forget I want to stop and thank DonSSDD for letting me pester him thru this process via PM’s and emails.

I got the two studs removed and the holes tapped. I removed the #5 exhaust stud first and used a strip of t-shirt to poke down in the hole. The void below this stud was small and shallow and was able to retrieve the strip with a screw but the void below the #3 exhaust stud was bigger and deeper and I was afraid that I would have a problem getting the strip out so I just used the shop vac while tapping the hole and then vac’ed it out and could not see anything down inside. Soooo… I have all new umbrella seal, all new springs and all new rocker arm installed and I am now ready to adjust the valves/lash. I have watched a ton of videos on this topic and they all seem to accomplish the same thing in a different way, remove the play between the push rod and rocker arms then turn an additional 1/2 to 3/4 turn depending on the video. It seems to be three main ways, 1. Do each cylinder one at a time, 2. Bring #1 to TDC and do both INTAKE & EXHAUST and do certain valves, rotate to #6 and do the rest. 3. Then there is this one… I am leaning toward this procedure, any thoughts. Here is a link to a video of what I did, may not be perfectly correct but it is how I “done” it. Lamar

and the intake shows outboard of center. I placed the checker on the rest of the studs and the gap between the checker and the valve stems are for all practical purposes are the same.
It looks like the link to the dirt forum that I posted above didn’t work so lets try this: http://www.thedirtforum.com/pushrodlengths.htm It seems that, that information is saying that it isn’t just simply put the checker on the stud and what ever gap that you may have indicates that the rod is to long or to short. Got very confusing really quick for me.

This is hair pulling time and I don’t have a lot of that to work with or to spare.

My thinking is that since the new rockers are contacting, at least cylinder #1’s stems pretty much in the center, that my pushrods are correct. I haven’t tried the black magic marker thing on the rest of the stems. Any thoughts up to this point? Lamar 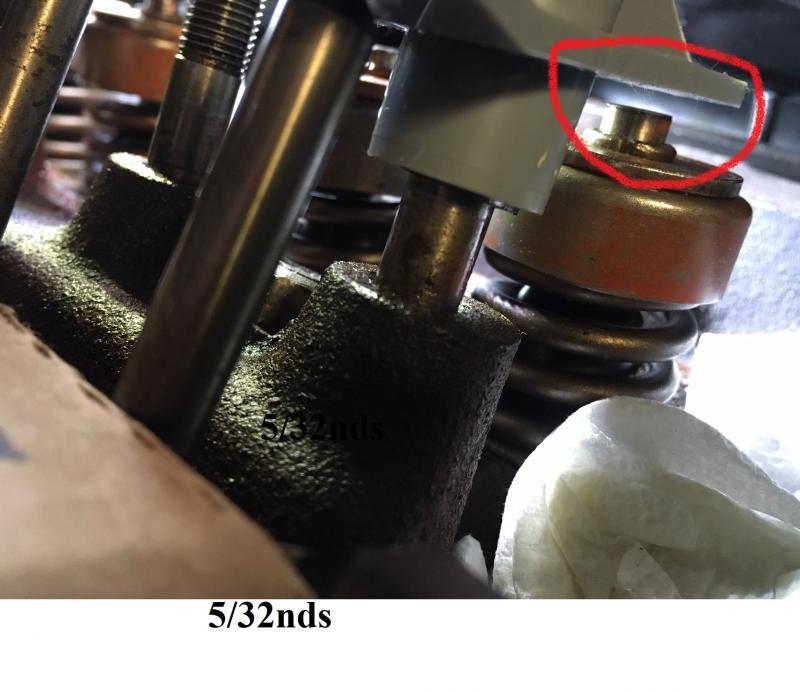 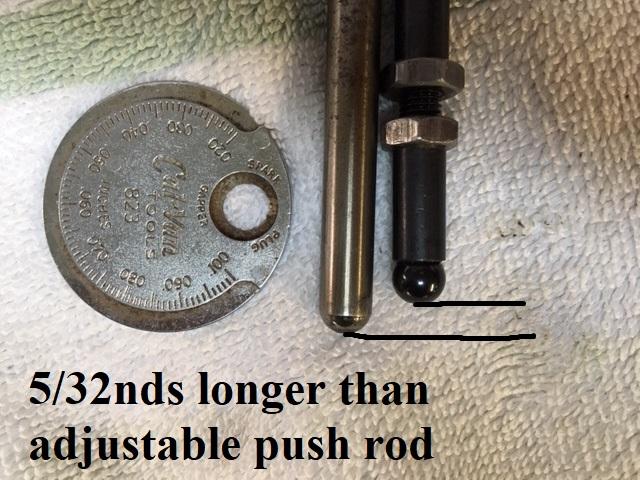 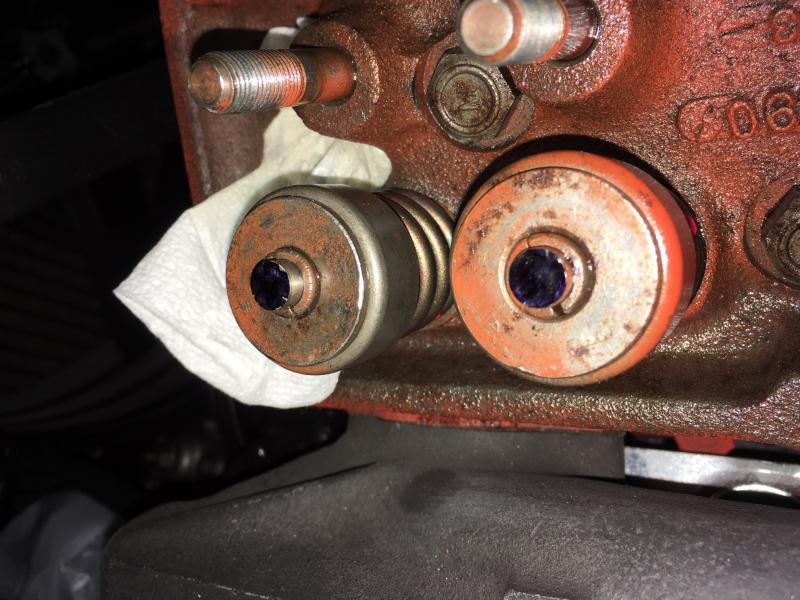 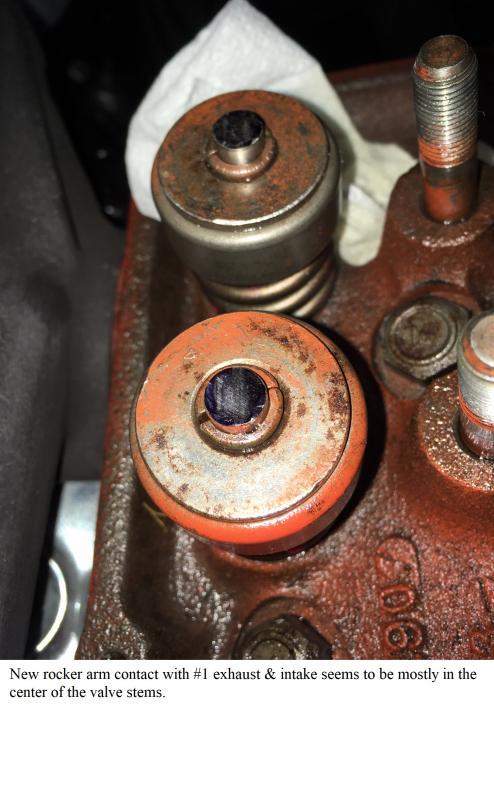 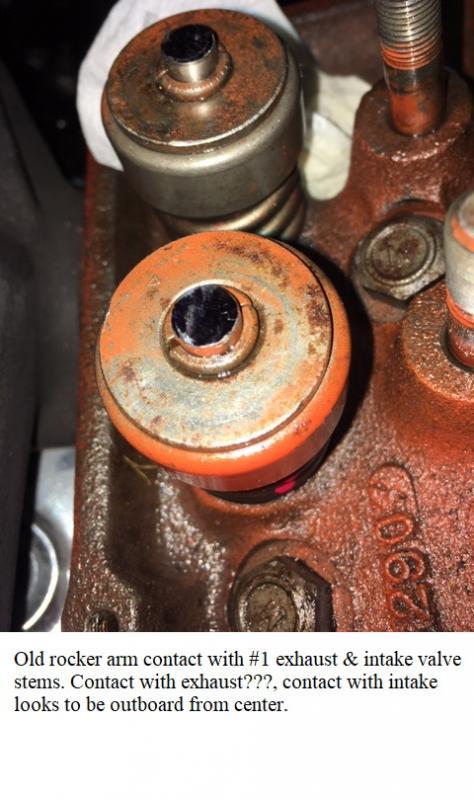 indicates the push rods are a bit longer than ideal 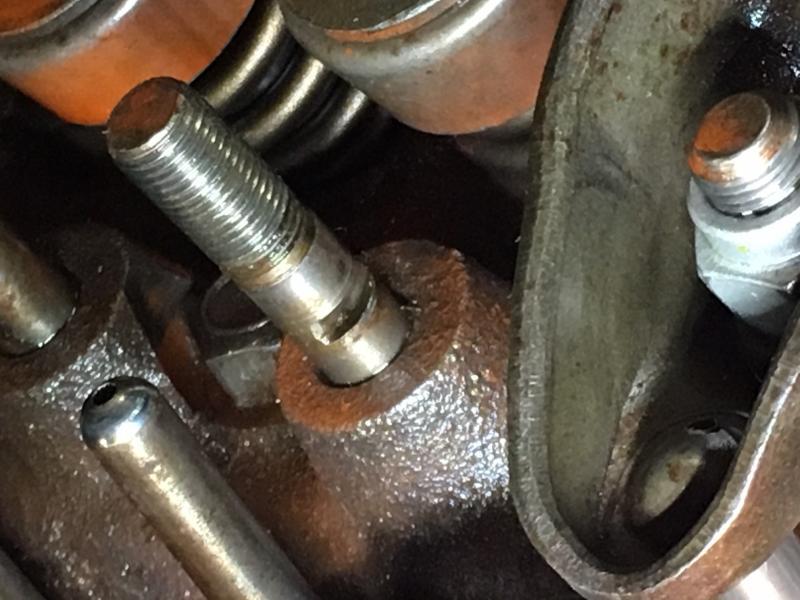 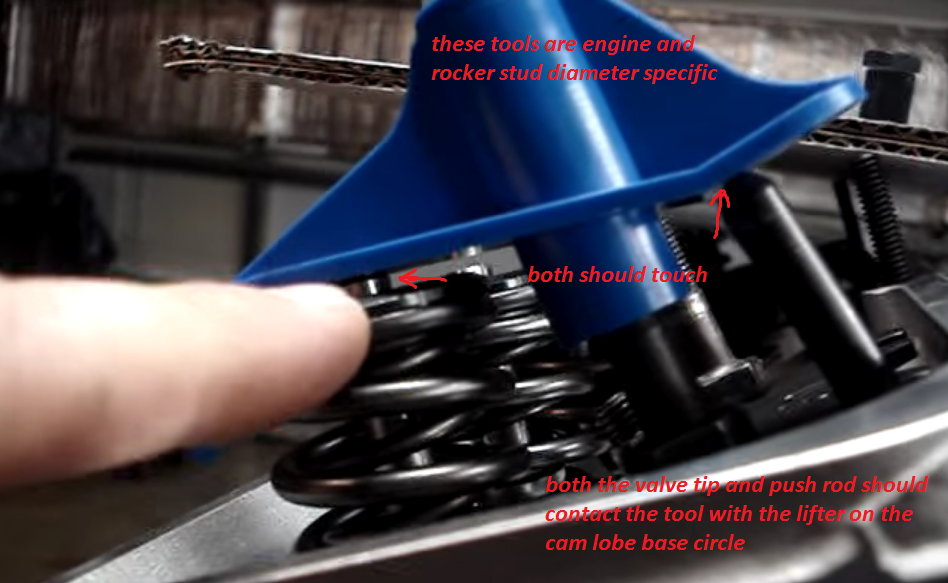 
unless you accurately measure all components its a guessing game,
but if the block was decked (most blocks are .023-34 over deck speck if untouched) and if you selected .015 thick head gaskets (most guys use .030-.035) and perhaps the heads were previously surfaced milled or decked that might account for the discrepancy in valve train geometry,
aftermarket lifters or rockers, or a small base circle cam will also change clearances an valve train geometry
Last edited: Dec 11, 2019
You must log in or register to reply here.
Share:
Facebook Twitter Reddit Pinterest Tumblr WhatsApp Email Share Link
Top