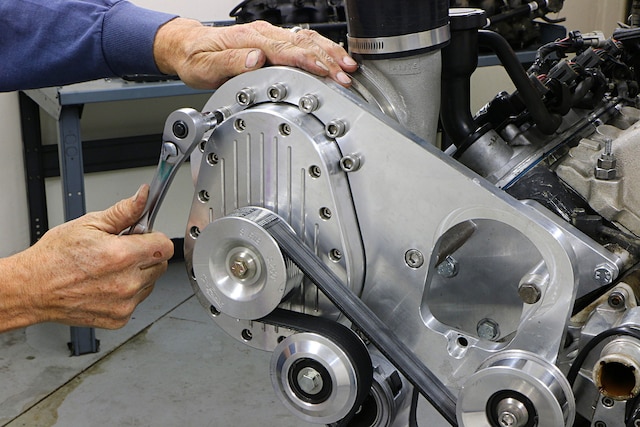 
Now in its third installment, our crate engine alternative has taken a turn toward the serious. Before we get into that, we should probably bring all the newcomers up to speed. We started things out with a simple trip to the junkyard to procure a more cost effective alternative to the typical crate engine. Thinking we came home with a 5.3L, we actually snagged a smaller 4.8L. The first upgrade saw a carbureted induction system comprised of an Edelbrock Victor Jr. intake and Holley Brawler carb, all controlled by an MSD ignition controller. The result was 331 hp and 316 lb-ft of torque. After adding a Comp cam and new valvesprings, the power output jumped to 441 hp and 354 lb-ft of torque. The ante was then upped with a 100hp shot from a Sniper nitrous kit and the power rose to 554 hp and 501 lb-ft of torque.

As you might imagine, we're happy with the progress so far. We know it's a far cry from the four-digit power levels of all them turbo buildups, but an honest 550 hp in any street car is a serious piece. That being said, the only thing better than two successive modifications adding 100 hp each is obviously three such modifications. While cylinder heads can yield substantial gains, the factory heads worked very well on this little 4.8L. Sure, if we bored and/or stroked the 4.8 out to 5.3, 5.7, or even up to 383 stroker status, CNC-ported heads may well add serious power, but not on a stock-displacement LR4. With 100hp upgrades getting harder and harder to come by, we decided to go off menu and order up one of our favorite meals. Nothing satisfies a power-hungry enthusiast quite like a heaping helping of boost.


Looking strictly at the numbers, we see that the naturally aspirated 4.8L was now producing 441 hp and 354 lb-ft of torque. We also see that the nitrous pushed the power output over the 550hp mark, so our starting point would be 441 hp and our goal would be to exceed the 554 hp offered by the nitrous combo by a solid 100 hp (or more). To that end, we enlisted the aid of a supercharger from the boys at TorqStorm. Yes, I know, turbos are all the rage and, if the Internet is to be believed, can be purchased and run for less than the cost of adding biggie fries to your burger meal, but we decided to go a different route. Besides, TorqStorm recently introduced their LS blower kit, and we had great success with this blower on both early Ford and Chevy engines in previous testing. Besides, the centrifugal supercharger kit was simple to install, and run on our carbureted combo. We liked the fact that the self-contained, billet blower required neither an oil feed nor a drain line. The lack of heat generated by a turbo or two will also make it appealing to many enthusiasts, as will the limited piping and zero fabrication needs.


With the blower in place, we turned our attention to getting the boost from the blower to the engine. Our first step was to replace the Holley 650 Brawler carburetor with a dedicated blow-through carb. The new carb featured adjustable, boost-referenced power valves and was installed in conjunction with a blow-through carb bonnet. TorqStorm supplied a section of tubing that featured their billet blow-off valve (BOV) so we simply positioned the BOV inline between the blower and carb in our custom discharge tube.

After hooking up a few vacuum/boost lines to the dyno and fuel pressure regulator feeding the carburetor, we were nearly ready. Using the MSD ignition we scaled timing back and added a splash of race gas and started tuning. By the time we were done tuning on the carb, the boosted 4.8L threw down peak numbers of 672 hp and 547 lb-ft of torque at a peak boost of 14.8 psi. We were purposely conservative on the timing (a maximum of 22 degrees), but still managed to exceed our goal, besting the nitrous combo by 118 horsepower. All told, the TorqStorm supercharger improved the power output of the carbureted combo by 231 hp (441 hp vs. 672 hp), which is a serious gain in anyone's book. With 547 lb-ft, there was also plenty of torque to get things moving in the right direction. 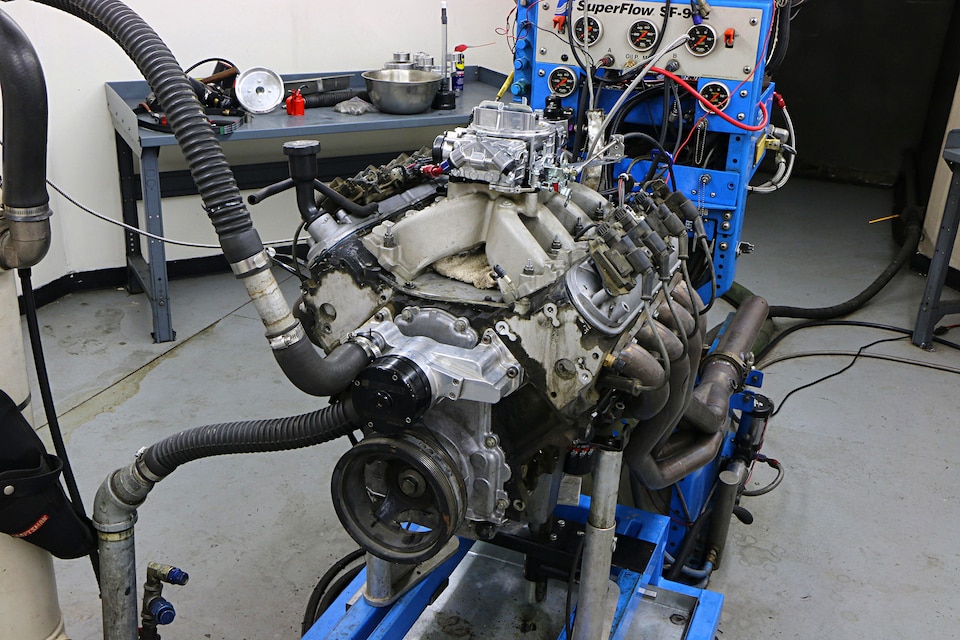 Our junkyard 4.8L LR4 was originally configured with a single-plane Victor Jr. intake from Edelbrock and an MSD LS ignition controller, which made dialing in the timing easy. We then augmented the 4.8L with a much more aggressive cam profile from Comp cams, along with new valvesprings. Run on the dyno with a 650 Holley Brawler carb and 1 7/8-inch headers, the cammed 4.8L produced peak numbers of 441 hp and 354 lb-ft of torque. 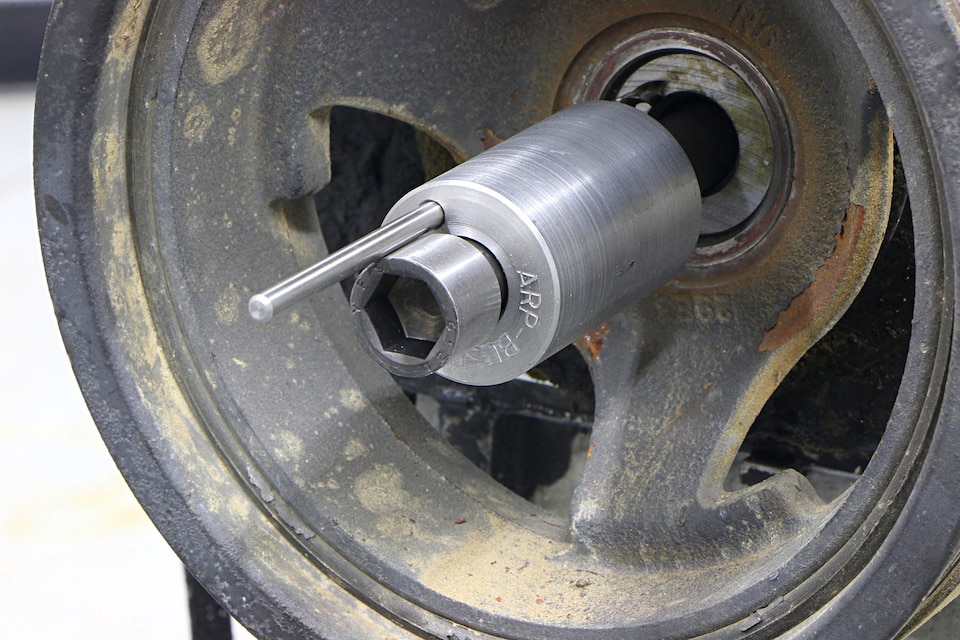 3/15
In preparation for the TorqStorm supercharger, we removed the factory damper bolt. This allowed access for the supplied drill fixture. The fixture was essentially a pilot to allow for a dowel hole to be placed in the factory crank snout. 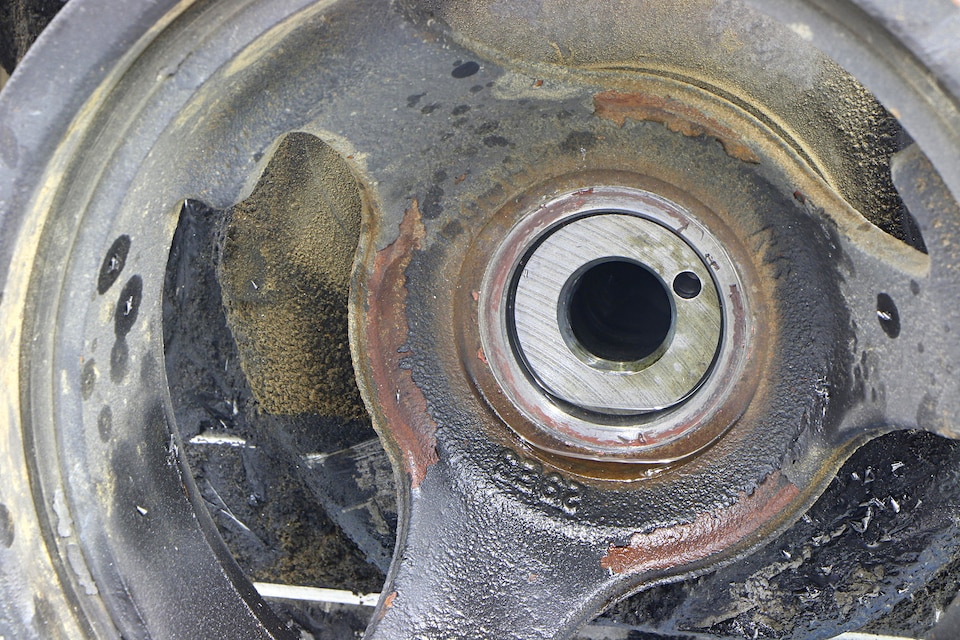 4/15
The finished hole can be seen in this photo. The dowel hole was used to positively locate the hub for the supercharger pulley to eliminate slippage common with the factory press-fit dampers. 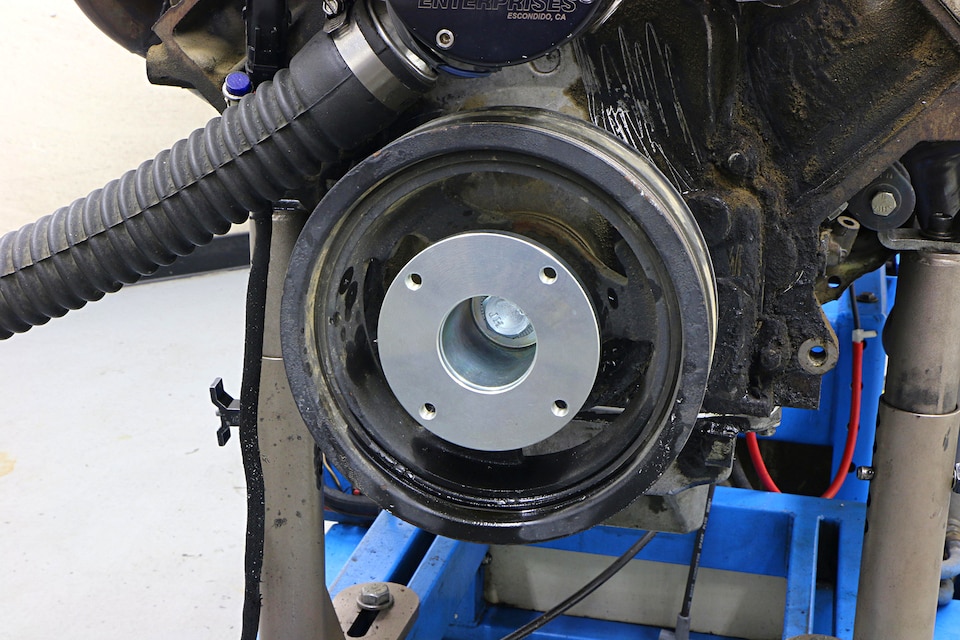 5/15
We then lined up the dowel and installed the supplied crank hub using the mounting bolt to replace the factory damper bolt. 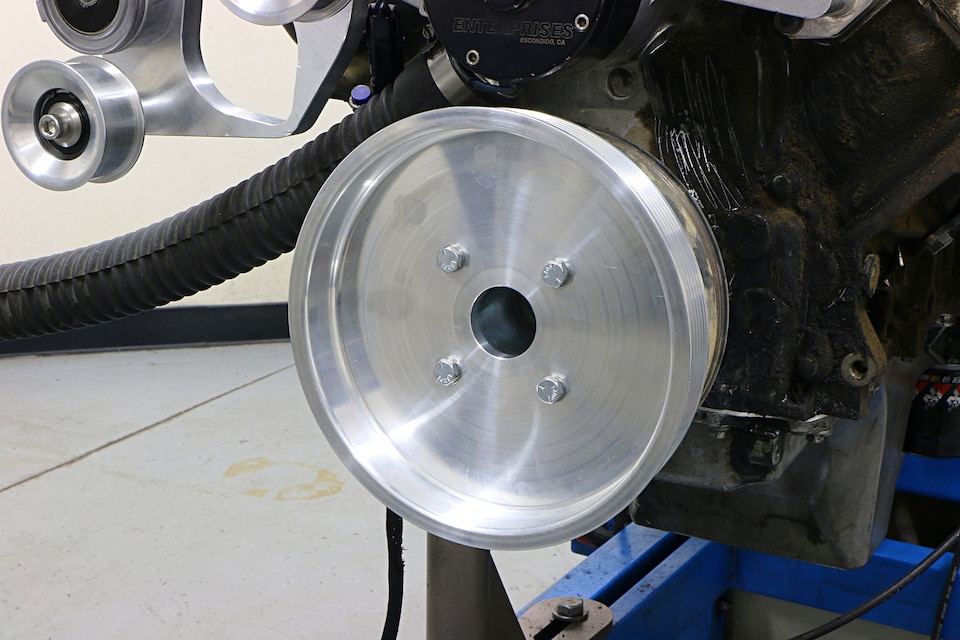 6/15
The hub was equipped with four mounting holes to secure the crank pulley in place. TorqStorn supplied us with two different crank pulleys to adjust the boost level. Shown is the larger 9.0-inch version. The smaller 8.0-inch version was installed later in our testing regimen. 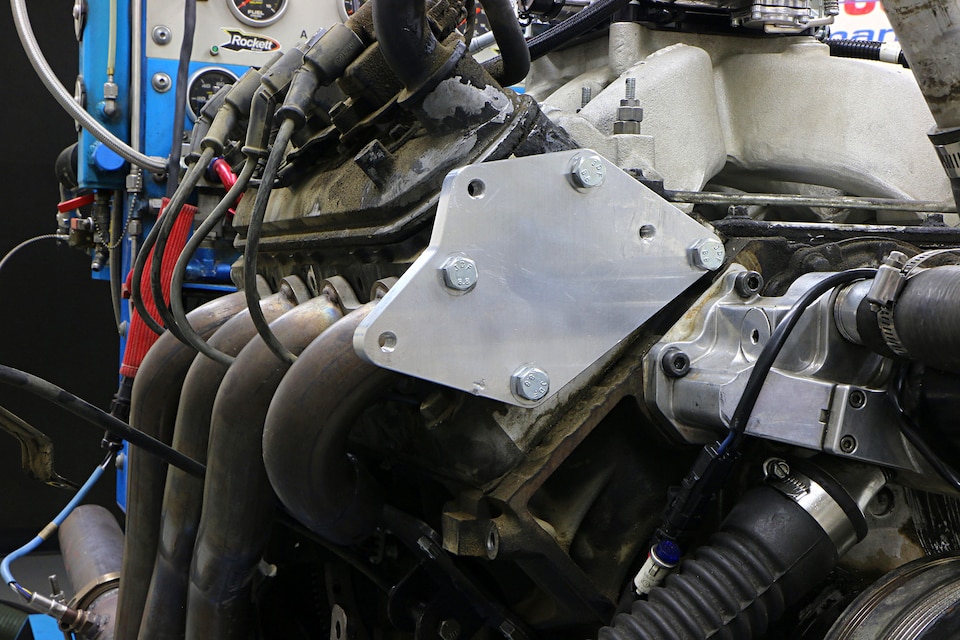 7/15
With the crank pulley in place, we started in on mounting the blower by installing the mounting bracket to the passenger-side cylinder head. 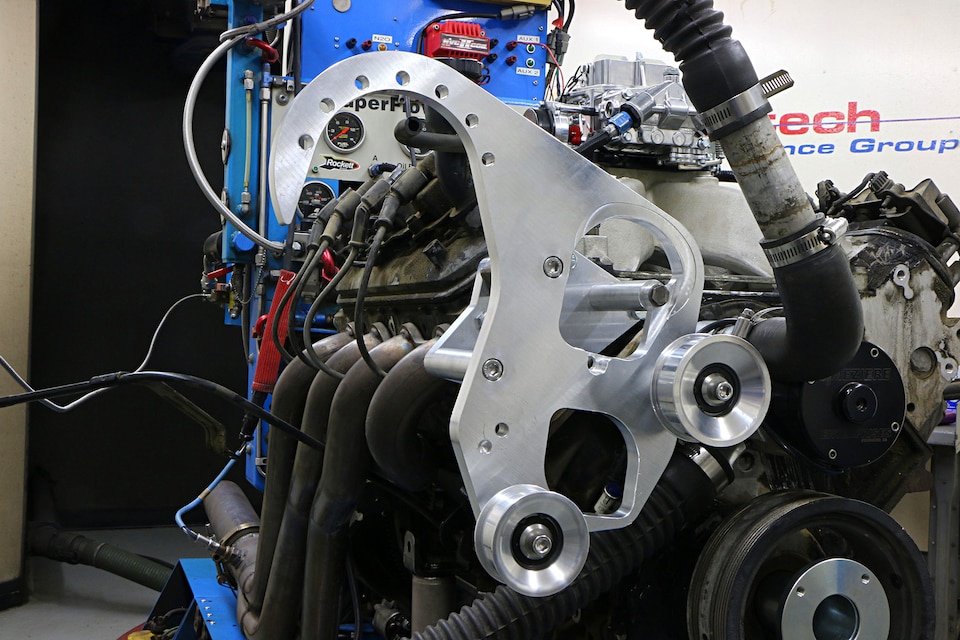 8/15
Using the supplied hardware and aluminum spacers, we installed the blower mounting bracket. This kit was designed to utilize the factory water pump, but we made it work with our Meziere electric pump using a third spacer (which we made). 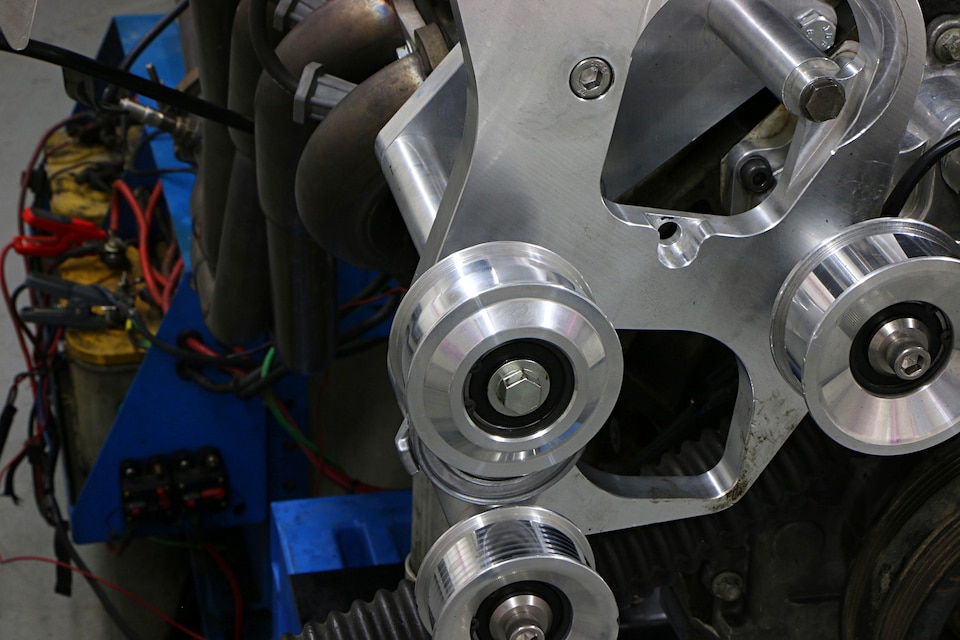 9/15
Unlike previous blower kits, this LS unit featured a spring-loaded belt tensioner. This system worked well in all of our testing, even up to 6,700 rpm. 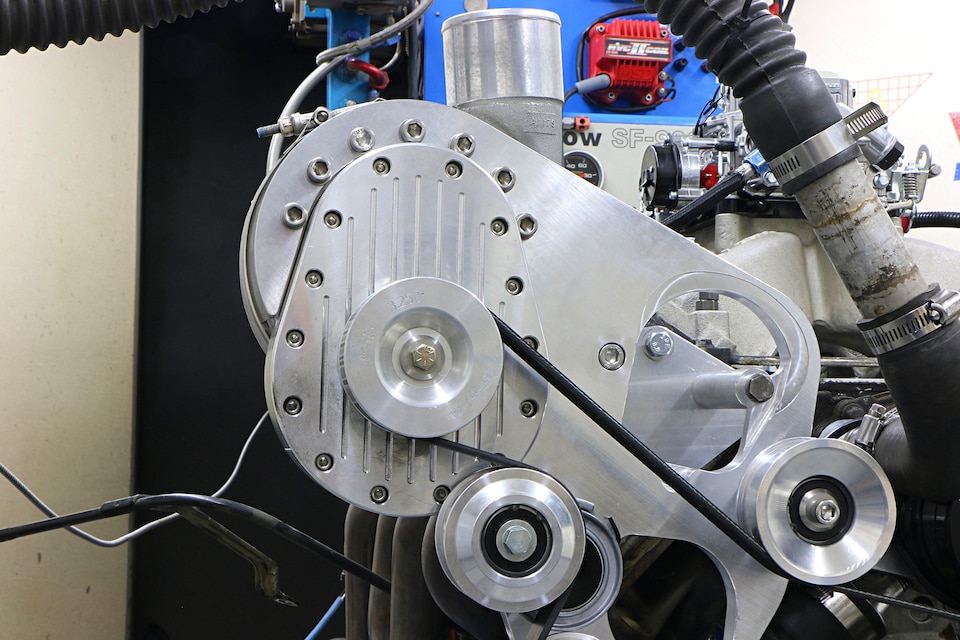 10/15
Using the seven mounting bolts, we secured the TorqStorm centrifugal supercharger to the blower mounting bracket then installed the eight-rib serpentine belt. 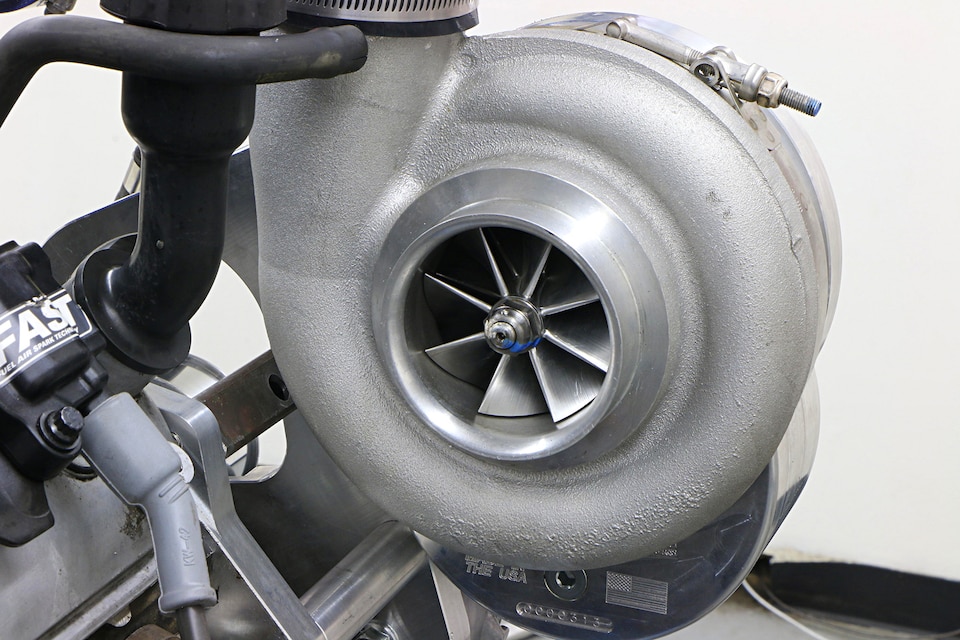 11/15
The TorqStorm supercharger featured an efficient impeller design that provided enough flow to support north of 700 hp, or more than enough for our little 4.8L. 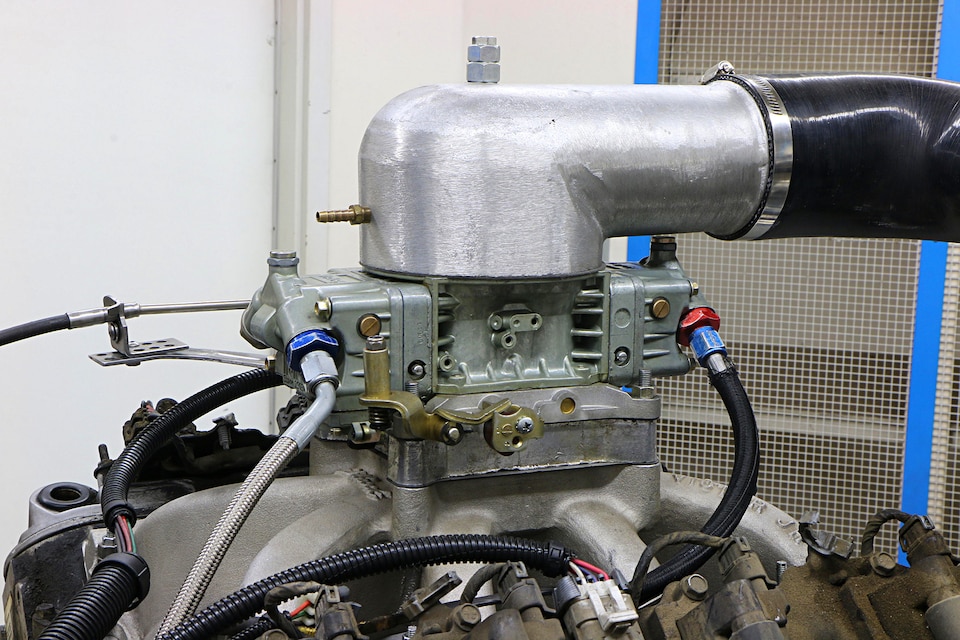 12/15
For our boosted application, we replaced the Holley Brawler carburetor with this blow-through Holley. We also ran the a carb bonnet to provide boost from the blower. Note the boost reference fitting designed to increase the fuel pressure supplied to the carburetor in relation to boost. 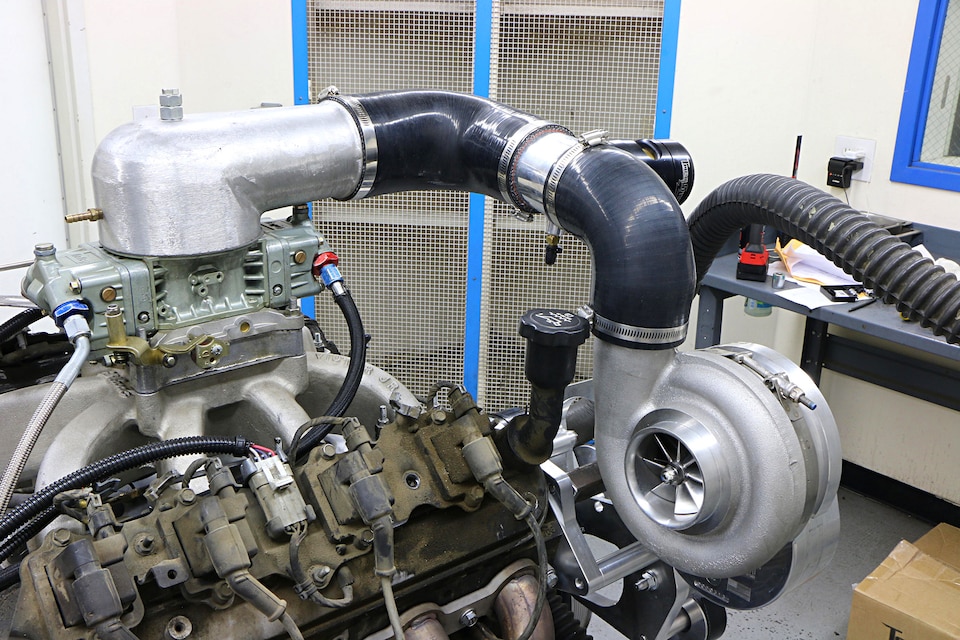 13/15
We configured this custom discharge tube from the supercharger to the carb bonnet that included a blow-off valve supplied by TorqStorm. 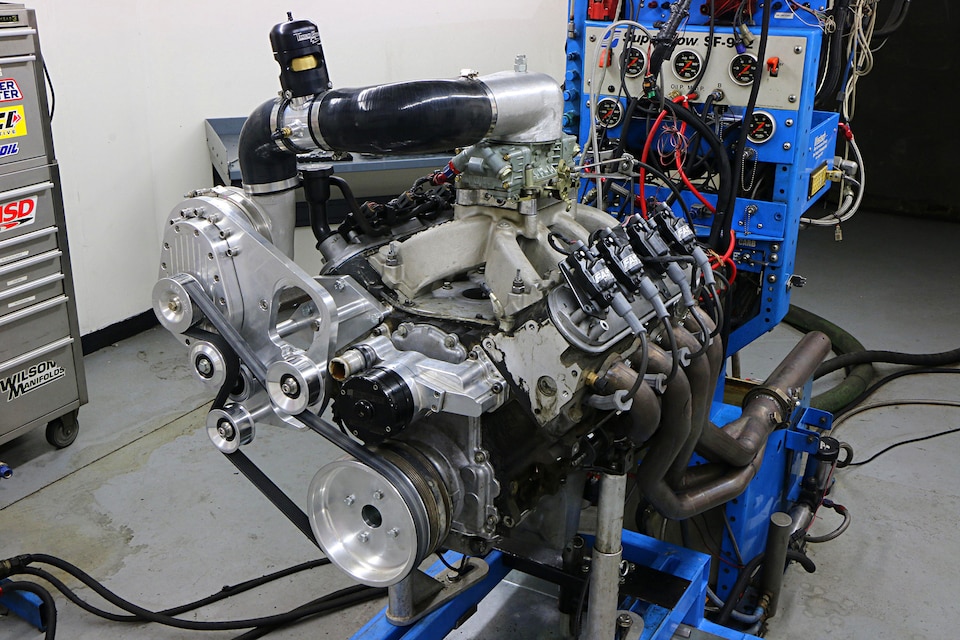 14/15
Run with the supercharger pumping out a maximum of 14.8 psi of boost, the carbureted combo produced 672 hp and 547 lb-ft of torque. That represented a solid increase of 231 hp over the 441 hp produced by the naturally aspirated engine, and 118 hp over the nitrous combo. 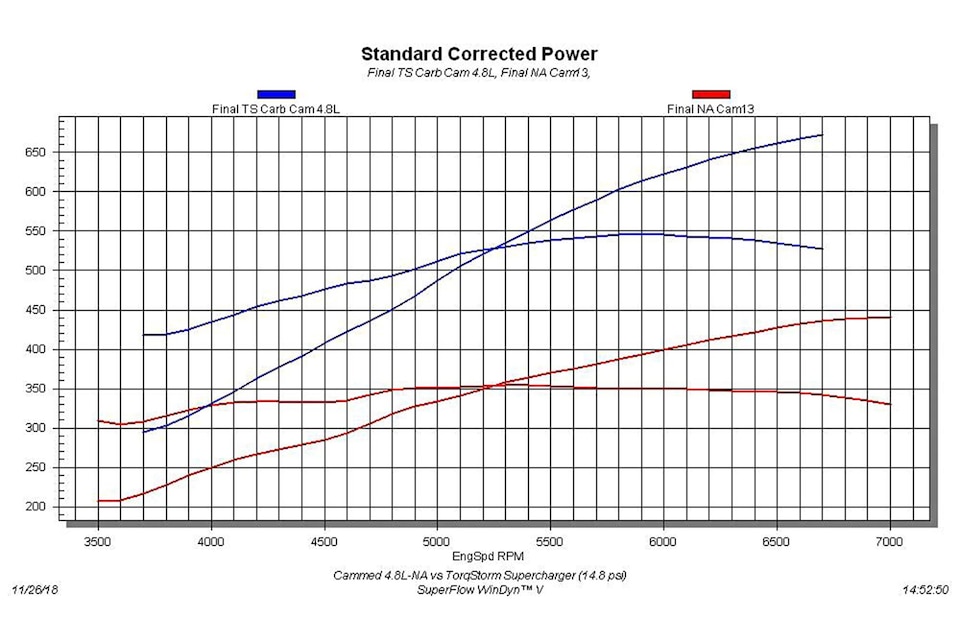 15/15
Here you can see the huge gains this blower made over the cammed NA version. With boost, the carbureted 4.8L jumped from 441 hp (or 554 hp with nitrous) to 672 hp at 6,700 rpm (we lifted before reaching 7,000 rpm) and 547 lb-ft of torque at 5,900 rpm. Compared to the NA combo, the TorqStorm supercharger improved the power output by 231 hp. The blower offered an additional 118 hp over the nitrous combo. That's a lot of grunt from the smallest displacement LS variant out there.

This is what Brian was referring to last year when he talked about the disposable racing guys.. Just bolt on a supercharger and a few other items to a junkyard motor and let her eat.... If it blows it blows. Just go get another one.
But... it is a testoment to that blocks strength and capabilities.
You must log in or register to reply here.
Share:
Facebook Twitter Reddit Pinterest Tumblr WhatsApp Email Share Link
Top