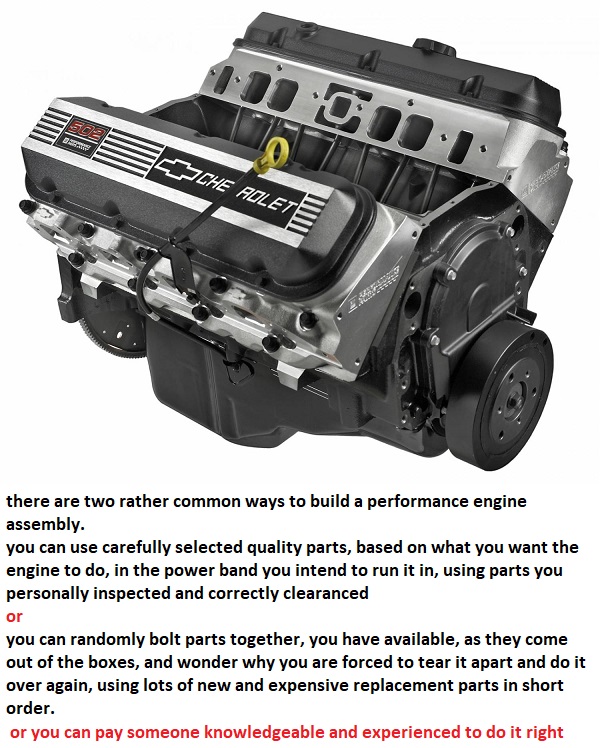 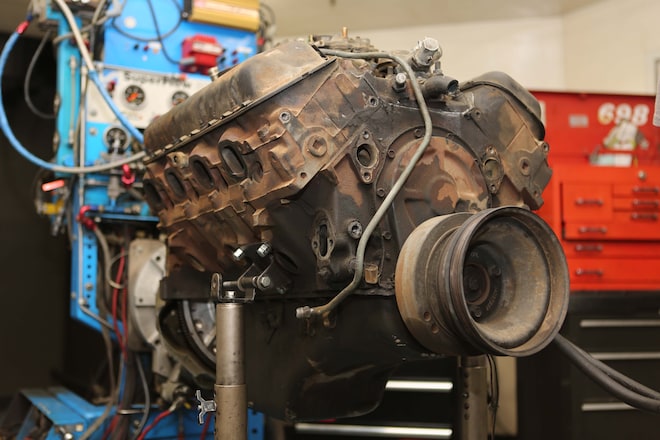 Hot Rodding is a hobby—not a career—for the vast majority of us. We drool over billet, but settle for cast, and pinch pennies to eek the most out of our performance purchases. Horsepower per dollar is worth its weight in gold, and with this 87-octane-compatible, 567-horsepower barnstormer of a build, welcome to El Dorado.

Watch 1,500HP Junkyard Short-Block!
It all started when Car Craft friend Curtis Mowery inherited a 1986 Suncrest Motorhome. The interior was decrepit, and the external fiberglass paneling was cracked and rotting. The engine, however, a 454ci mark IV big-block Chevy, was healthy and showed only 35,000 miles on the clock. Behind it was a TH400 that had been treated to a recent rebuild. As a whole, the RV was an ungainly eyesore. Under the skin, it was a perfect drivetrain donor. While vehicles of this stature aren’t the most common– or practical– platforms out there, Ford, Chevy, and Dodge all offered big blocks for motorhome service. We have seen several make appearances at junkyards over the years, though they do present a much more challenging engine-pull scenario, which we’ll attest to firsthand.

Knowing the RV was a lost cause from the get-go, no time was wasted being gentle pulling the engine. Sawzall’s buzzed, prybars levered, and cutting torch flames licked away obstacles. Soon the grease-ball of a big-block was out and headed to Westech for a dyno and some mandatory speed parts. Afterward, it would find a new home between the fenders of a 1962 GMC truck project.


Loading...
At the Dyno
Smog era big blocks get a bad rap. Their sub-8.0:1 compression rations, tiny cylinder head ports, and anemic camshaft grinds are the main culprits. But what would the 31-year-old engine crank out on the engine dyno? Though it had a relatively conservative odometer reading of 35,000, lugging around a multi-ton motorhome isn’t an easy life.

Westech’s Troy Goldie buckled the big-block into the dyno cell and Steve Brulé worked the throttle for the first pull. Through the stock Quadrajet carburetor and a set of uncorked dyno headers, the engine delivered an oddly quiet 335-horsepower and whopping 485 lb-ft of torque. It was definitely healthy and far livelier than expected.

But who can leave well-enough alone? The goal wasn’t simply to validate a stock RV engine, but to see what kind of grunt was locked inside those 454 cubic inches by installing a better-breathing top end. To accomplish that goal, we turned to Trick Flow Specialties for one of their complete top end kits (PN TFS-K413-580-560). The kit included gaskets, valvetrain and camshaft, fasteners, and a set of PowerOval 280 as-cast cylinder heads. The kit bottom-lined at $3,499.97 on Summit Racing. That is certainly a significant amount of coin, but feasible for most gearheads with a project car piggy bank, or during tax return season. The only thing not included in the kit was an intake and carburetor, so we ordered a Professional Products single plane (PN 53037) from Summit Racing for the price of $209.97. Brulé did note that a dual-plane intake would have likely provided more torque down low without giving up much on the top end due to the engine’s planned conservative redline.

The old top end was unceremoniously yanked from the virgin motor revealing carbon-coated, but un-damaged pistons. We cleaned the deck surfaces and laid fresh Felpro gaskets in place. The Trick Flow heads were installed with included ARP head bolts. This kit utilized a roller cam ground with 236 degrees of intake duration and 242 of exhaust duration as measured at 0.050-inch tappet lift. The lobe separation angle was cut at 112 degrees and valve lift measured 0.600-inch on the intake and exhaust. Because this engine was not equipped with a cam-stopper plate (as some later big-blocks are) was necessary to control camshaft endplay. Brule grabbed a roller thrust bearing from Wetech’s parts stores and installed the camshaft, timing chain and sprocket, lifters, and the remainder of the valvetrain. The intake was then bolted in place and the factory HEI distributor reused. We opted to borrow one of Westech’s Holley Ultra HP carbs because of the tuning-parts on hand, but in theory the Quadrajet, with its 800-plus cfm, could have be reused.

With the engine buttoned up, it spun the dyno once more, recording 560 horsepower and 530 lb-ft of torque–a 225 horsepower improvement over stock! Is a head and cam swap a bolt-on affair? We’ll gladly stand on our soapbox and say yes! On a pushrod engine, the job can easily be accomplished in a day, requiring no specialized tools and with no need to pull the engine from the car—sounds like a bolt-on to us. Thrilled to have bolted 200-plus horsepower onto an otherwise-stock RV engine, we began to ponder where else power was hidden. After some quick math, it was determined the engine only had an 8.2:1 compression ratio—as pump-gas friendly as compression ratios come. So, to verify the affliction for cheap gas, we purged the dyno tank, refilling it with run-of-the-mill 87 octane from a local station. If detonation were to occur, the dyno would show a reduction in power and torque. Instead, it showed a 7-horsepower increase in horsepower and 5 lb-ft rise in torque. This was a legitimate pump-gas big-block and for a total sum of $3,709.94. Next time you’re perusing the local boneyard, give that monstrous motor home a second look. 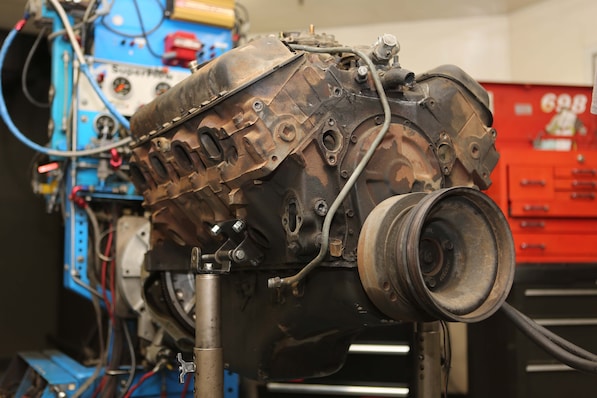 The RV it came from might have been a junker, but this 454ci big-block wasn’t ready to call it quits. 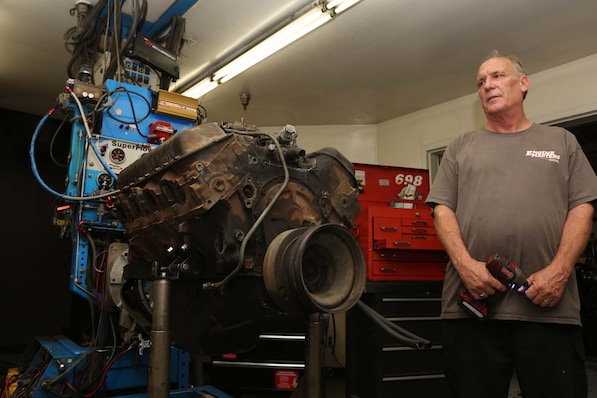 “Why don’t you ever bring me nice things,” wonders Steve Brulé, unamused at the crusty turd in his dyno cell. 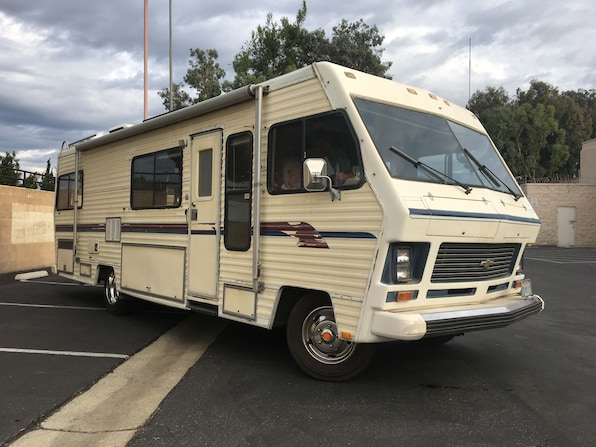 Welcome to the ‘80s. This past-its-prime motorhome is ugly, but who could turn down a free big block? 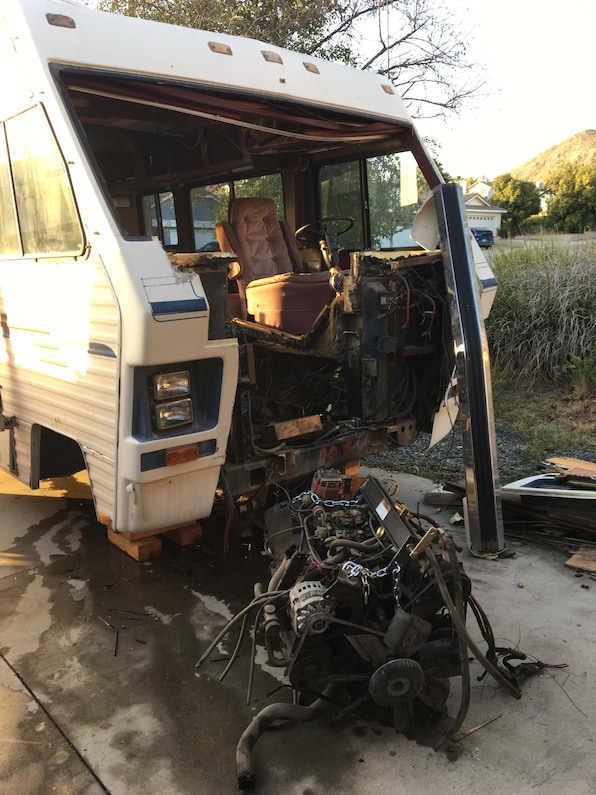 There’s a right way to pull a big block from a motorhome. This isn’t it. Being that the body was scrap and there was no intention to save it, the quickest way to the prize was through the grill–or where the grill used to reside. 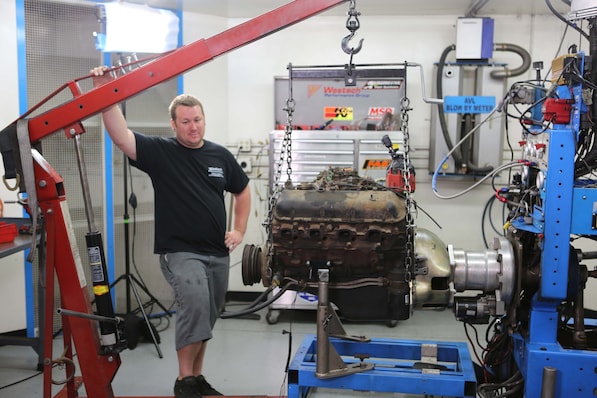 Troy Goldie loaded the big block onto the dyno. With the exception of a set of dyno headers, we ran the engine exactly as it was set up in the motorhome. The result was a surprising 335hp and 485 lb-ft of torque. 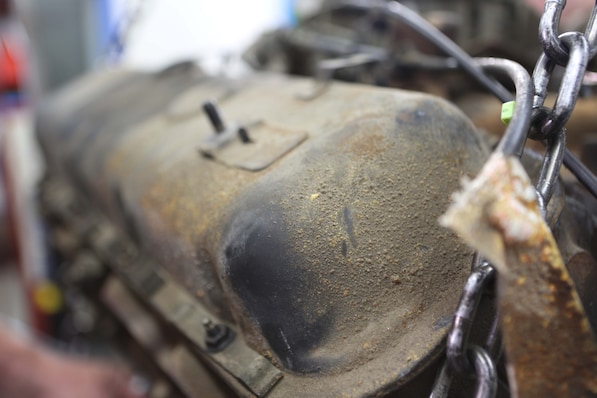 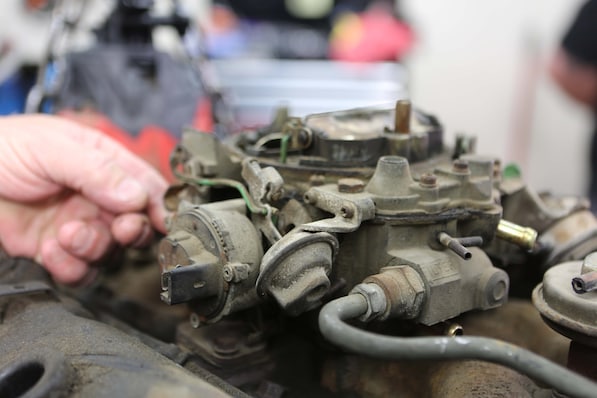 For the initial dyno run, we used the original 800cfm Quadrajet carb. For subsequent tests we used a Holley due to the tuning parts we had on-hand. However, to keep costs down, the Q-Jet could easily be repurposed. 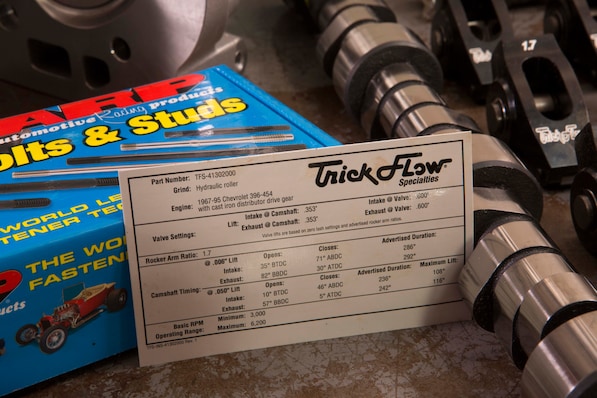 Trick Flow’s top-end kit contained everything needed for the swap. The cam specs are aggressive enough to produce real power, but the engine will still idle in gear and generate enough vacuum to support power brakes. 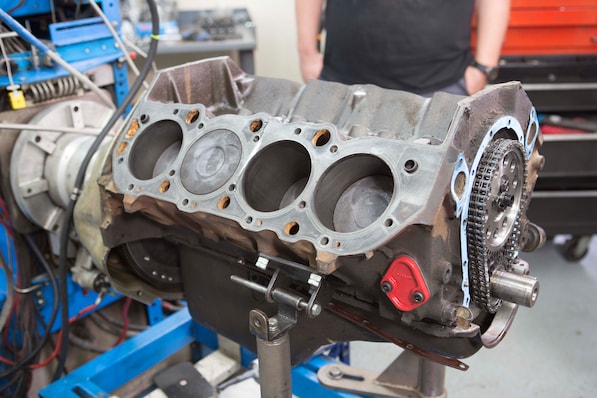 We disassembled the engine to a short block in preparation for the new top end. The pistons had plenty of carbon but otherwise looked healthy. 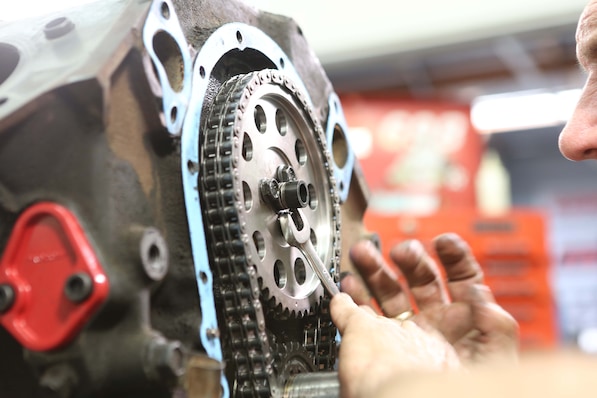 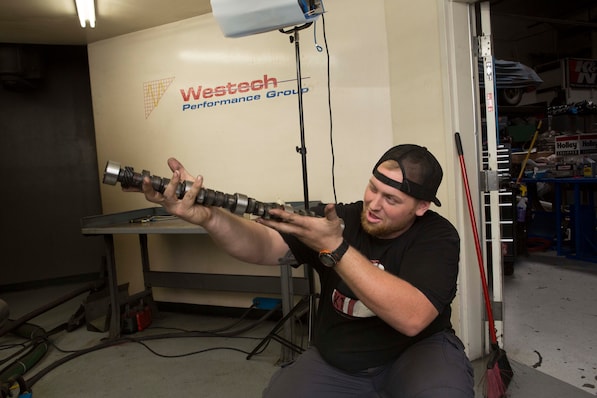 Curtis Mowery holds a genuine “RV cam,” sourced from the wild. Did you know every Craigslist engine ever has one of these? 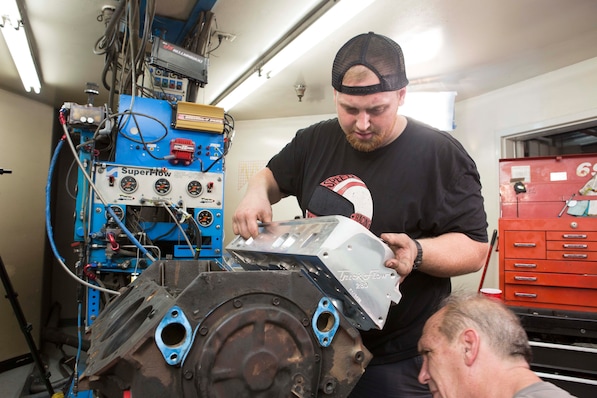 With the cam in place and decks cleaned up, Trick Flow’s PowerOval 280 heads are installed. 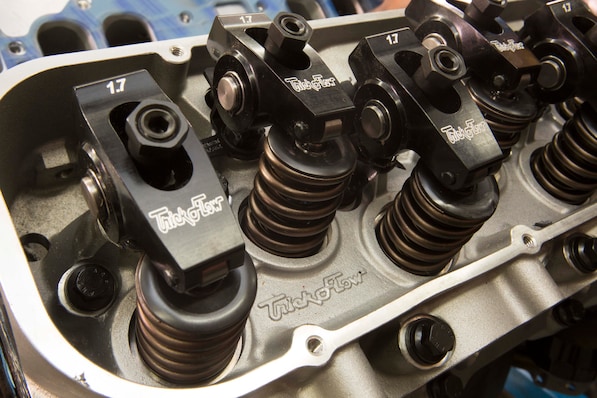 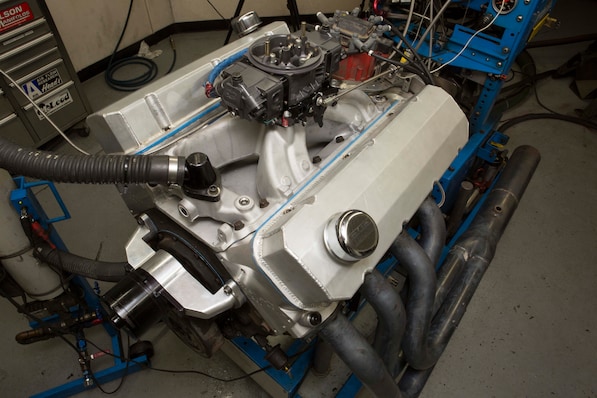 A Professional Products single-plane manifold was used, but Steve recommends an air-gap–style dual plane for street use, noting they offer significantly more midrange and sacrifice only a few ponies up top. A Holley 950 Ultra HP provided fuel mixture for the final dyno tests. 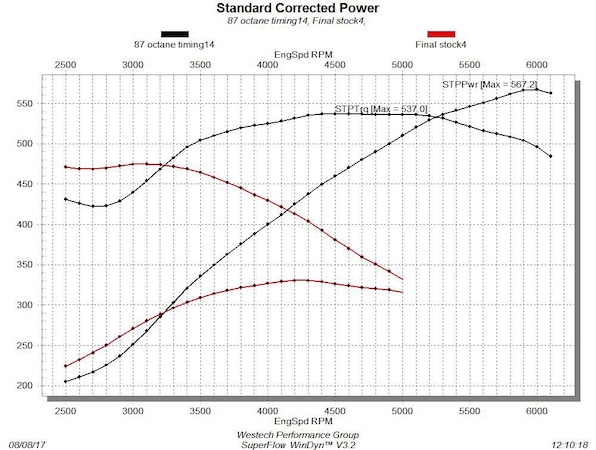 The last pull of the day was conducted on lousy, California-standard 87-octane fuel. Despite the swill, the engine cranked out an awesome, 567.2 horsepower and 537 lb-ft of torque, sounding like a real big block in the process. The total horsepower improvement for the day was a whopping 232.2 horsepower. Not bad for a day’s work.
Last edited: Feb 2, 2022
You must log in or register to reply here.
Share:
Facebook Twitter Reddit Pinterest Tumblr WhatsApp Email Share Link
Top