What exactly is bullnosing a crank? And what is the benefit of doing it? I was talking to a buddy last night and he is using a factory forged crank and he want to bull nose it to reduce the rotating mass! Please educate me!

I have been watching Vortec Pro Performance also, and they talked about bullnosing also?

Staff member
this bullnosing ,was popular among some builders as its easy to increase profits by profiling the counter weights ,
and its easy to show you've done custom mods to the crank counter weights, to justify the cost increase,
but its been my experience that it produces little or any benefits a properly profiled knife edge crank counter weights
and crank oil scraper and windage tray don't provide without the potential for needing expensive mallory metal inserts ,to regain lost counter weight mass. 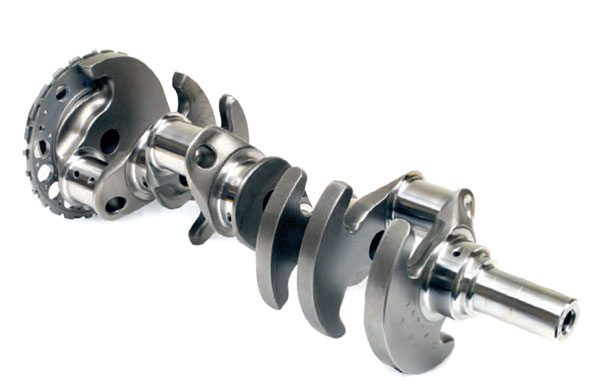 Super-lightweight cranks for race engines are available with relieved counterweights, gun-drilled journals, etc. in an effort to reduce rotational weight. In addition, a popular modification involves bull-nosing and knife-edging the edges of the counterweights. Bull-nosing (radiused profile) and knife-edging (narrower chamfer profile) together create an “airfoil” cross-section of the end of the counterweight. The bull-nose profile is at the leading end of the counterweight while the knife-edging is at the trailing end, similar in concept to the cross-section of an airplane wing. In theory, drag factors, such as air resistance and oil cling, are reduced. For a street engine, it’s not worth the time and effort. Reserve this for race applications where (in theory) you’ll gain benefits with decreased air resistance and increased oil slinging. (Photo Courtesy Callies)
Click to expand...

Yeah, I figured that much.From what I gathered it’s used to reduce weight of the piston/rod set. Watching one video, they reduced the bobweight in that engine by about 200 grams of one piston/rod set. I am assuming that engine is going to run higher rpms!
You must log in or register to reply here.
Share:
Facebook Twitter Reddit Pinterest Tumblr WhatsApp Email Share Link
Top