"One test is worth a thousand expert opinions."

I decided to take a bullet for the team to try an find out if the instructions that came with the one piece gasket were right: mount dry with no adhesive. Aaaamp that turned out to be a disaster. I’ll need to do that over this weekend. The oil pan seems to be leaking significantly from all for corners. #doover

That has been my experience also. No sealant = leaks.

Hey Dorian, even with the one piece gasket, its always wise to put a blob of RTV silicone in the corners. Those are problem areas for the SBC oil pans. I put some under the gasket and also on top before the pan went on and bolted up.

and I generally use a product like these brush-on sealants on both the threads and both sides of the one-piece oil pan gaskets
(yeah it says you don,t need it) 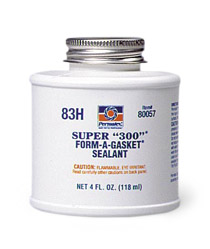 Staff member
Yup. I just wanted to see if that one piece gasket would work as instructions directed. Clearly not If I have time tomorrow I’ll do it over.

I maybe tempted to try an tune the motor instead a bit and try to figure out why that vacuum needl is vibrating like that at idle. I wonder if two of my ignition wires are swapped. Will recheck. Somehow I’m now thinking it’s more likely to be ignition than lash.

I agree with Grumpy, I did that too, put high tack adhesive on mine too. But its always imperative to seal the corners with slicone on the pan gasket!

DorianL said:
I decided to take a bullet for the team to try an find out if the instructions that came with the one piece gasket were right: mount dry with no adhesive. Aaaamp that turned out to be a disaster.
Click to expand...

I put RTV Black between the gasket and block ONLY and had NO problems. I did this since like you, I have nothing
keeping me from pulling the OIL PAN to see how things are going.

BUT ...... There are two different gaskets depending on which pan you need if IIRC.

Are yo sure you had the correct pan gasket ???

Just guessing here and maybe I'm all wet, but there two different pan gaskets. Or maybe this does not apply to your engine ???

Staff member
Sooo. Took the car out for a small drive. The cam seems to be performing beautifully. Torque comes on smooth and strong. I think... I think the vibration maybe gone. The problem was my test drive was too short. The smoke generated from the oil burning off was driving me nuts !!! So I’ll have to fix the oil pan first.

I dropped the pan today. I’ll super clean and reinstall it tomorrow... with the blobs.

I hope this works out because I’m very impressed with the cam and I want to drive this fella more.

Staff member
It’s the correct pan gasket. A closer look shows that it was leaking from the rear of the pan; not the front.

But you do raise a good point. I did spend a lot of time measuring and remeasuring the pan to get the right gasket.

That being said, I hate the pan. The kickouts really get in the way of fastening and unfastening the rear corner bolts.

Staff member
I did the valve lash on one side only (hot). It seems to have improved things.


I played this back in slow motion and found that the swing was extremely regular. You would not say by looking at this video.

Maybe I need to do the lash over on the other side.

Staff member
Software dyno predictions are very useful but they are not precise,
a few component changes can noticeably effect the predicted results
and that may not reflect reality, in some cases.
factors like headers better head flow than the data shows
roller rockers and an efficient exhaust can boost power far higher than the software shows it might
https://www.compcams.com/xr270hr
heres a link to some dyno info that's very misleading,
of the comp cams web site
in that its from a 9.25:1 compression 350
any 400 should easily produce about 15% more power than a similar 350,
but other factors can change the results far more.
the comp web site prediction makes the cam DORIAN selected look far less than impressive.
with a set of restrictive heads and an intake that both restrict potential power.
this obviously will produce different results from DORIANS 400 with its different components.
thats a bit like the dyno graph RICK produced in that theres always factors like head flow,
exhaust flow restriction, ignition advance, fuel/air ratio etc.
that will change the true results from the software prediction.
and while RICKS software shows the CRANE 119661 produces less power and torque than the CROWER 00471,
that was only true in my corvettes 383 ABOVE about 4700 rpm
as I tested both those cams in my corvette the crane 119661 had a noticeably smoother power curve up to about 4000 rpm,
than the CROWER cam, and both easily produce abundant wheel spin at the least provocation,
but I went with the crane cam as it was noticeably easier to drive in traffic where you spend 90% of your time with the engine spinning under 3500 rpm in my case
Last edited: Feb 20, 2021

Staff member
It’s frustrating for me not to be able to stretch the legs of this cam swap, but... the very few miles that I put on it feel extremely well rounded. This is definitely the cam I wanted.

The area around the rear main seal is the problem area of SBCs. I don't put the RTV on it and just put the pan up there and bolt it down, I do like Rick did, I stuck it to the block and put RTV under it on the block in the corners, I stuck the gasket to the block with high tack adhesive. I then put the gasket on let it set up, I put the RTV in the corners again and let it set up for about 30 mins so it has a film formed on its outside then put the pan on. I have done that many times with engines and what that does is makes the RTV form to the area its sealing but it doesn't stick to the pan. I have only had a leak once, and that was my fault, I think I torqued the pan bolts too much in that case.

Dorian, I think you'll enjoy it quite a bit once you get the pan nailed down. I would definitely chart the ignition timing like Grumpy suggests, have someone with a tablet write down the numbers while you advance the throttle through 100 or 200 rpm increments like Grumpy suggests, all the way up to 3000. When I do it, I just use the idle crew on the carb to increase the rpms.

The oil pan is back up and properly torqued and RTVed.

I’ll let it sit at least 24 hours before adding the oil.

I would wait at least 12 hrs, but Right Stuff says it takes a full 24 hrs. But they do say you can speed it up with a blow dryer on medium temp for 5-10 min increments with the dryer a foot away.

Staff member
As I stated in post #83 (A FEW POSTS EARLIER) the brush on sealant and silicone in the gasket/corners seals and bonds inside an hour or so, and the linked sealants are oil proof.
yeah you could use a thin bead of the silicone on the gasket surface but Ive always used it only in the corners and the brush -on sealant in the cans on both sides of the oil pan gasket along the pan rails as I don't want ant chance of excess silicone squishing out into the oil pan where it might get loose and block oil passages in the block.
loose excess sealant can cause problems

http://garage.grumpysperformance.co...k-after-a-cam-lobe-rod-or-bearings-fail.2919/
all that extra silicone sealant that gets squeezed out off the gaskets tends to get carried by the oil flow into the oil pan where some of its trapped in the oil filter during each successive trip thru the engine, but bits that get trapped in the oil passages can rapidly reduce oil flow and destroy bearings, cam lobes and rockers and lifters. 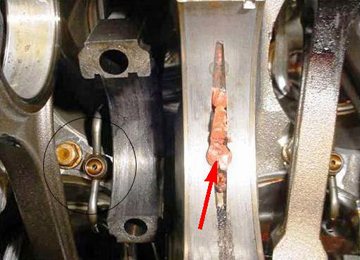 but once it reaches the bearings the clearances are far tighter and either they restrict oil flow or get trapped and damage the bearings, cam lobes lifters,rockers or crank journals
Last edited: Feb 21, 2021

I agree Grumpy, that's why I use the Permatex high tack on the gasket itself. The corners of the pan gasket are the only place I use the RTV, I use it to fill any void in those corners that cause the slight leak.

Staff member
Well... that’s interesting. I still have a leak. I took the car for a drive and let it rest for an hour. That’s when I noticed it: 1 drop every 30 seconds coming from the actual bolt on the driver’s side rear corner.

I put the best sealant I had on both sides of the gasket and amazingly... that BOLT still leaks. The gasket is staying dry. It’s coming from the bolt.

Is the oil level that high in the oil pan that an hour later, there’s still a drip ?

My plan ? Drop that bolt. Clean it up real well and reinstall with RTV.

"One test is worth a thousand expert opinions."

DorianL said:
Well... that’s interesting. I still have a leak. I took the car for a drive and let it rest for an hour. That’s when I noticed it: 1 drop every 30 seconds coming from the actual bolt on the driver’s side rear corner.

I put the best sealant I had on both sides of the gasket and amazingly... that BOLT still leaks. The gasket is staying dry. It’s coming from the bolt.

Is the oil level that high in the oil pan that an hour later, there’s still a drip ?

My plan ? Drop that bolt. Clean it up real well and reinstall with RTV.
Click to expand...

Yes, correct Dorian. I haven't investigated it for myself, but a really good GM Master Mechanic told me that you NEED RTV on those back 2 bolts threads, otherwise you will have a leak there.

Staff member
Soooo. I let the car sit overnight. Then I yanked the bolt and cleaned it to spotless. Cleaned the block threads as well as I could. Reinstalled with RTV and torqued to spec. My fingers are crossed.
You must log in or register to reply here.
Share:
Facebook Twitter Reddit Pinterest Tumblr WhatsApp Email Share Link
Top