I watched Tonites You Tube Video Grumpy .
Good info.
They should do a Muffler shootout on the Engine Dyno.
Hasn't been done since 1991 by High Performance Pontiac Magazine .

Staff member
We've all heard the talk. It seems to run the gamut from, "Dude--headers are worth 100 hp," to the naysayers who snivel "Headers? They aren't worth the trouble." The truth is actually somewhere in the middle. Because results can vary so wildly, we decided to take a look at some past testing just to see what works and what doesn't.

If you're new to performance engines, and all headers tend to look alike to you, you might want to start with Jim McFarland's treatise on header design on page 62. This will give you the basics on why headers are designed the way they are, and why they don't all look the same. For this story, we're going to perform several header comparisons to shed some light on that age-old question of how much power headers are really worth.

All the dyno tests in this section were performed on different small-block Chevys, but when it comes to headers and exhaust tuning, this same information is completely relevant to any engine--only the header sizes change to match the displacements. This is a relatively busy subject with plenty of variables, but once you get to know all the important characters in this horsepower and torque stage play, the ending is always fairly predictable. Most of all, have fun with this. This is one session involving lots of hot air that's actually helpful.

We'll start with a very mild Goodwrench 350ci small-block test with stock cam timing. The idea here is to compare the power output of a stock small-block 350 with cast-iron exhaust manifolds and headers. Because this is a mild engine, the peak power difference occurred relatively early in the power curve, with a maximum 34 hp and 53 lb-ft of torque gain at 3,400 rpm. That's an excellent 19 percent improvement in torque. Had the engine been fitted with a decent camshaft to allow the engine to make more power around 5,000 rpm, the improvement would have been even greater. However, this test does point out that even a stock engine will respond to a decent set of headers. As power potential increases with a good set of heads and a camshaft, headers and a free-flowing exhaust system become absolutely essential components.

Test 1: Stock GM Goodwrench 350 with Q-jet and aluminum intake, stock iron exhaust manifolds, a stock camshaft, and a 2 ½-inch exhaust system with turbo-style mufflers.
Test 2: The only addition is a set of 1 5/8-inch Hooker street headers with the same exhaust system.

The book on Tri-Y headers is that they pump up the midrange torque over a set of four-into-one headers, which is exactly what we saw with this test. In the midrange between 3,600 and 5,200 rpm, the torque jumped as much as 27 lb-ft, but this comes at a price. Note that the average torque gain throughout the entire curve is only a scant 2.6 lb-ft. This is because at the lower engine speeds like 3,000 rpm, the Tri-Ys lost 32 lb-ft compared to the four-into-one header. Would these Tri-Ys be quicker in a mild street car? When we plugged the two power curves into the Racing Systems Analysis Quarter Pro simulation, the two curves produced very similar results. The four-tube-header version ran a scant 0.08-second and 1.1-mph quicker through the quarter than the Tri-Ys. Much of the difference was due to the slower 60-foot time exhibited by the Tri-Ys because of the torque loss below 3,400 rpm. The simulation used a 2,600-stall converter. It's possible that with a little carburetor work, that torque loss could be overcome. The Tri-Ys might have over-scavenged the engine at low rpm, requiring more fuel, and that could make these two headers more even in the car. But there appears to be no significant gain in performance with the Tri-Ys. It's mostly about where you want the torque gain to occur within the engine's power curve.

Test 3: Four-into-one 1 5/8-inch headers on a mild 355ci small-block with an Edelbrock RPM dual-plane intake.
Test 4: Same as above, except we added a set of Doug Thorley Tri-Y headers.

This is an interesting test of header length. Test 5 compares standard-length 15/8-inch headers to Test 6 with the same diameter but shorter-length intermediate headers. By looking at the Difference column, you can see that the shorter headers sacrificed torque below 3,600 rpm but made up for that by making as much as 23 more horsepower at the top. The average torque made by both engines is within 1 lb-ft, which is negligible. Basically, the shorter headers moved the torque higher up the rpm curve. If you plugged the intermediate-length header curve into a light car like an early Mustang or early Chevy II, for example, where you could not use a large tire, then the shorter headers might make traction a little easier to achieve. But you'd want to use the long-tube headers in a big, heavy vehicle or a truck where the stronger torque curve would help acceleration.

Test 5: A mild 355ci small-block with Hedman 1 5/8-inch, 34-inch long-tube headers with a 2 ½-inch exhaust system and a pair of Flowmaster mufflers.
Test 6: Same as above except with a set of Hedman 1 5/8-inch intermediate-length headers.

This is a great example of how larger headers affect the power curve. The larger 1 7/8-inch headers lost a tremendous 47 lb-ft of torque at the bottom of the curve. By 3,400 rpm, the big headers were actually making a little more than the smaller 1 5/8-inch headers. This may be a hiccup with the smaller header power curve that could be addressed with jetting or timing had we spent more time on tuning. By 4,400 rpm, the smaller headers were making as much as 33 lb-ft more torque than the larger headers. Then by 5,600 up through 6,600, the larger headers took over and made as much as 26 more horsepower at 6,600 rpm.

If you look at the average power curve numbers, you can see that the larger headers actually made slightly less average power. That's because the horsepower gain at the top did not completely make up for the torque loss at the bottom of the curve. So what's the bottom line here? If this engine is going into a light car with a manual trans and a deep rear gear, or at least an automatic with a stall speed of no less than 3,600 rpm, the larger headers might be a slight advantage. The important point here is that a 13/4-inch header is probably the answer, since it would improve the low-speed power while not sacrificing nearly as much horsepower at the top end.

Another point worth mentioning is that what we're seeing here with these two primary-pipe-diameter power curves is not really as much about power loss or gains as it is about moving the curve around where the engine makes its best power. Had we tested a set of 1 ¾-inch headers, we're confident we would have witnessed an average power increase over the other two primary pipe diameters. This merely reinforces the idea that engines operate best when outfitted with the right set of parts that complement the rest of the engine package.

Staff member
keep in mind they used a performance, cast log manifold ,
most O.E.M. cast manifolds would be much more restrictive

I really wonder where the average driving puts the numbers like where most street cars spend most of there time except when racing. I read through this whole thread with my teather so no links this time. I have mid size headers right now and have pondered long tubes but not sure right now. Gotta get the ole engine going first. Thanks for the share Grumpy!!!

keep in mind they used a performance, cast log manifold ,
most O.E.M. cast manifolds would be much more restrictive

I love watching this show! I wanted long tube, but i have ground clearance issues. So I am using mid length !

grumpy, who makes a really good quality header for my car?
Click to expand...

I get similar questions all the time, and there ARE certain brands that do have a reputation for better fit and finish on headers,
but your results are totally dependent on you doing accurate ,prior research, your asking the correct questions,
knowing exactly what cylinder heads your using,and yes better quality tends to cost more than bargain basement prices!
knowing exactly what car it will be installed into and if your dealing with a better quality manufacturer helps.

I am on the toss up right now between long tubes and tri-y headers. Problems finding the right kind of tri-y's for my application. Doug Thorly has some that fit along with Stan's but they are a different design then I would like. I would love to be able to fit some Shoenfeld but the ones I want specify they do not work fit chevelles.

assuming you don,t have a restrictive exhaust thats choking the increased exhaust flow rates,
in many cases thats simply due to increased cylinder scavenging efficiency,
and in most cases you'll need to richen the fuel/air ratio, to compensate, and change the ignition advance curve, the changes will usually result in an INCREASE in power over the original exhaust config,
no one anywhere can accurately predict exactly what your particular engine combo will find to be the best tune-up specs but any good dyno operation or experienced shop will start with a basic known base line and tweak the combo to get the best results, you'll want a consistent 40 lbs of fuel pressure, you'll want to keep the coolant temps under 200 F
youll want the oil temps in the 200F-210F range
and youll ant the injector pulse duration to stay under 75%-80% at peak rpms , this may require larger injectors, and youll want significantly less than 3 psi of exhaust back pressure at peak rpms.
heres a basic tune 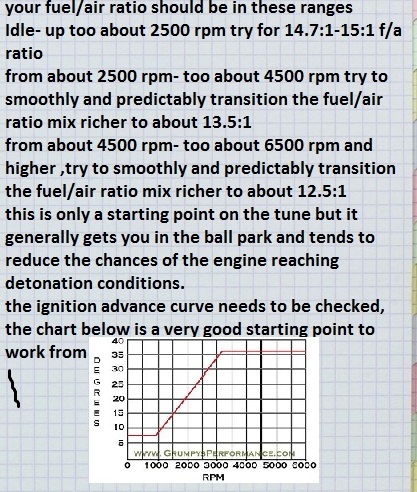 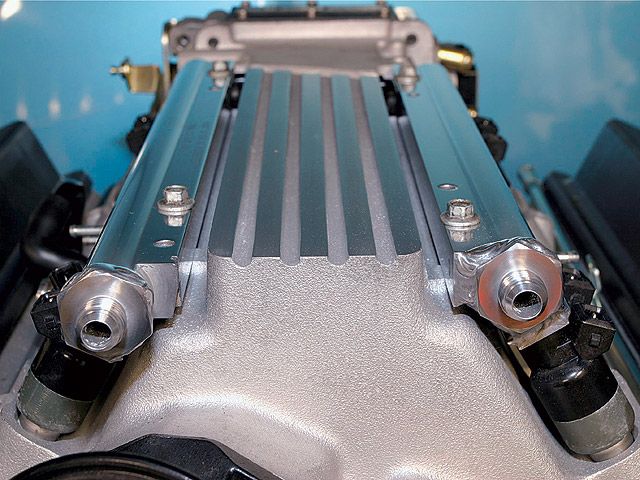 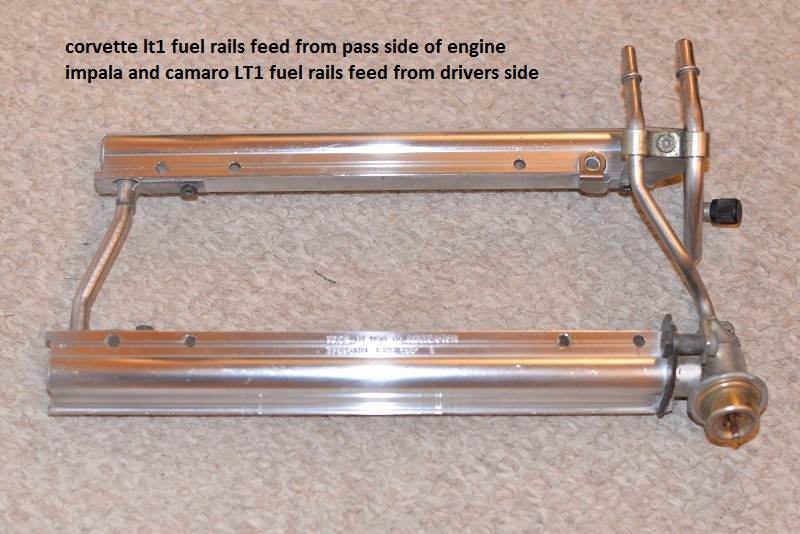 an adjustable fuel pressure regulator allows you the option of feeding the injectors with more pressure which results in a slightly richer fuel/air ratio at any pulse duration.(at times this helps during a tune up) 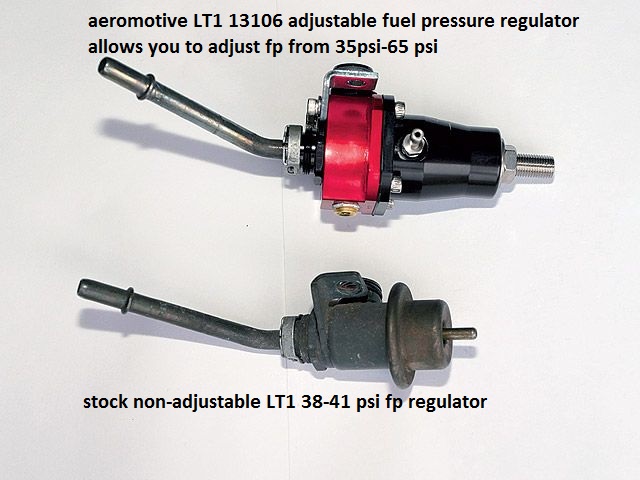 I need to get an exhaust system for my 63 impala and I have the 2.5 ramhorn manifolds.

The system I am looking at (classic industry) list 2 systems for the high performance 327. One list the head pipe as 2 1/4 inches (14 gauge) and the other head pipe is 2.5 inches, but uses 16 gauge steel.

I am wondering if the 2.25 in is the inside diameter of the pipe or is this the wrong system?

I am assuming that the only size pipe for the high performance 327 is 2.5 inches.

Also, which gauge would be better?
Click to expand...