Ok, this is hypothetical, w/no real application intended and just for stimulating my brain.

Here we go...Assuming that the square inches or volume of the pipe(s) is the same, on a given motor, is there an advantage to dual pipes/exhaust over a single pipe exhaust?

Would a single pipe have an advantage, because the mass of the exhaust that is flowing, is larger?
Click to expand...

exhaust gas flow is never constant it comes in pulses that vary in pressure , some what in volume and ignition timing changes or duration as the rpms change, thus the ideal cross sectional area required in the exhaust header and exhaust pipe,
for a given engine displacement and rpm also varies
your also dealing in most cases with an un-equalized firing order where each cylinder bank does not always alternate equally.
thus two properly sized exhaust headers blending and flowing into an x-pipe to dual exhaust beyond will generally provide a slight improvement over a single merged exhaust.
two blended exhaust paths of total equal cross-sectional area at least, in theory, allow for maintaining a marginally higher gas flow speed increasing cylinder scavenging energy, yes within specific rpm ranges either style exhaust could be designed to maximize results 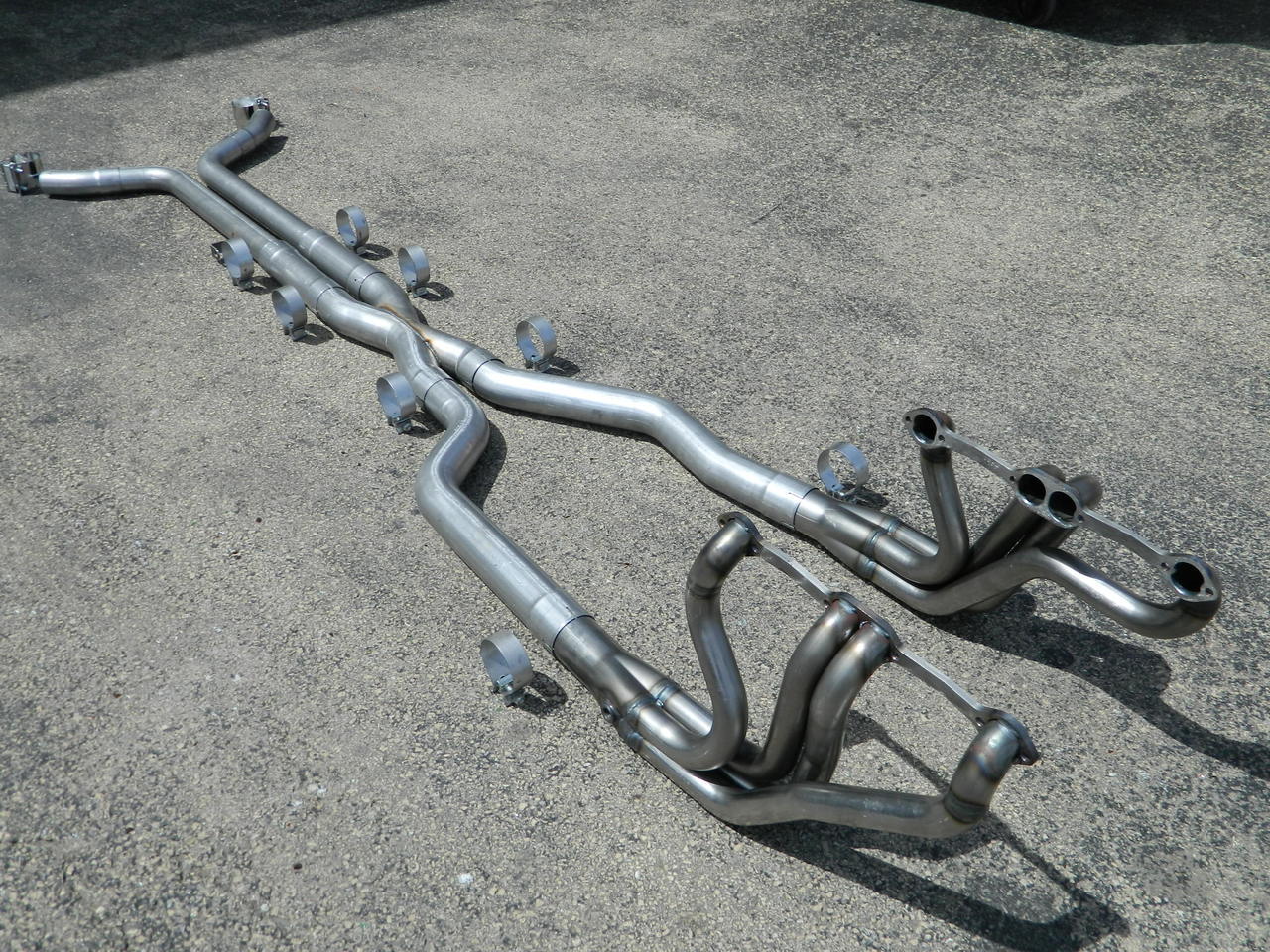 Look at it another way. There's a boundary layer at the inside surface of the pipe where the flow velocity is much less than that at the center of the pipe. The thickness of this boundary layer is going to be fairly constant, so the area that's unrestricted is smaller for the dual pipes than for the single pipe.

Either of the above could be made up for by making the two small pipes slightly larger than the "equal cross section". Thing is more pipes, even if smaller, weigh more and usually are harder to package. So it's not all about flow.

There's also the deal of how and where do you split that flow, the entry could contribute to flow losses.
Click to expand...

good points, and all true, but in most cases , if you do the math , the higher average inertia of the dual exhaust flow configuration aids low and mid rpm power without any significant reduction in peak power,
most cars spend the vast majority of thier runing time well below peak power levels, consider the fact theres very few factory performance cars with a single exhaust, theres a reason!
IF the exhaust system is properly designed and its generally
a bit easier in most but not all cases to fit two smaller diameter exhaust pipes under a lower ground clearance car. 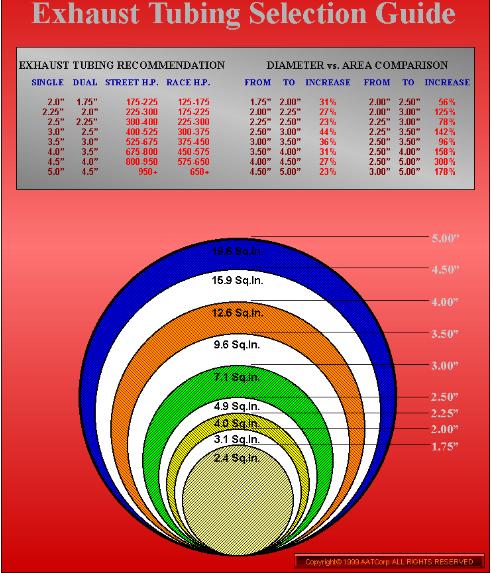 example
look at the chart above
two 3" exhaust pipes show 14.2 square inches of crossectional area
even a single 4" pipe would only be at 12.6 sq inches, and fitting a 4"-4.5" single under most cars and use of a matching muffler will not allow ground clearance on most cars 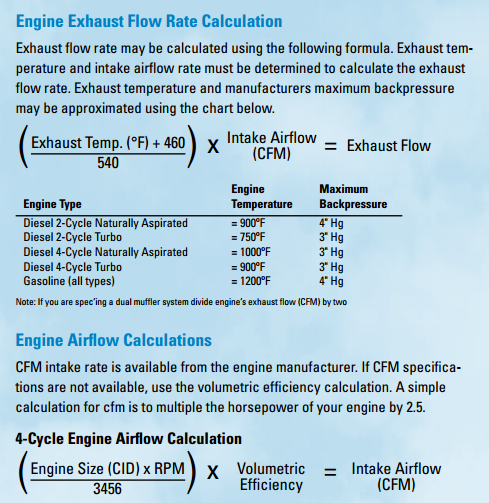 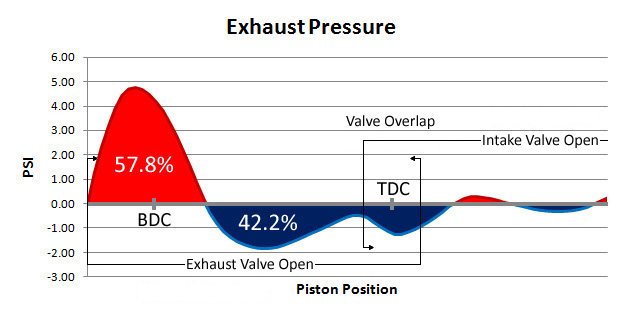 if exhaust flow was constant and consistent in volume and speed it would be rather easy to calculate a single exhaust pipe diam and length and cross sectional area to maximize cylinder scavenging.
but exhaust gas is pulsed,(see charts)if you were to think of the mass of a single cylinders exhaust gas as if it was a coke beverage can, dropped through a 2.5" diameter pvc pipe the distance and speed the mass or in this case the coke can travels changes the backpressure or vacuum behind the can in the pipe,the same thing happens with exhaust pulse and the smaller diameter pipe retains the higher pulse speeds even if the pulse is split, remember the goal is a negative pressure scavenging wave arriving at the back of the exhaust valve as it opens.
what came on any factory car, is based mostly on what was cost-effective to produce and easy to install,
and durable over a longer-term, so that they won,t be dealing with recalls or pissed off customers,
parts selected from the factory, and what would pass emission testing is the goal.
very little effort or thought is put into MAXIMIZING PERFORMANCE,
on most cars especially, if its not cost-effective to maximize performance.
if a part won,t last at least a year or more than a basic warranty lasts it is unlikely to be factory installed.
one of the first things you did with that car was add headers and a better ignition..
then they read how that new cam and intake combos add an easy 60 hp in,
HOT ROD OR ROAD AND TRACK...
you'll hear guys say things like " the factory used a 2.5" exhaust pipe so thats all thats required"
but the factory engine was never tested with that new intake manifold,
headers and radical cam you installed nor was that high stall converter or rear gear ever used.
and when you swapped out the 19 lb injectors for that set of 28 lb injectors,
and reprogrammed the CPU..... yeah...
all that stuff was never envisioned under the warranty or considered by the engineers, either.
I can easily remember when those first Z28 camaros came out,
there was a mad rush to swap to decent headers,
as all the magazines assured the new owners it was a fast easy way to add 30 plus hp.
and you were reminded to order the cross ram option if you wanted to be the kink of your neighborhood
http://www.camaros.org/crossram.shtml
Last edited: Feb 9, 2022
You must log in or register to reply here.
Share:
Facebook Twitter Reddit Pinterest Tumblr WhatsApp Email Share Link
Top