Blueprint Data
Except as noted, all dimensions are in linear inches. For cam and valvespring specs, see the Camshaft sidebar.

Building a Cadillac 500 From the Junkyard
Written by John McGann on January 16, 2016 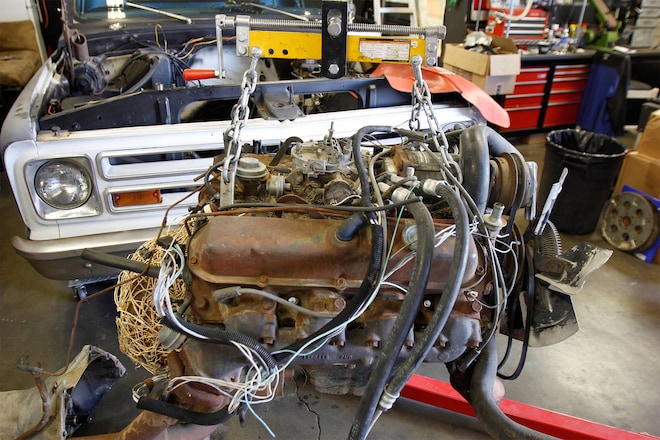 When Size Does Matter

With their 5-inch bore spacing, Cadillac’s 472- and 500ci engines were the largest-displacement, domestically produced gasoline engines at the time of their production, which spanned the 1968 to 1976 model years. That record held true until 2002 when Dodge bumped the displacement of the Viper’s V10 up to 8.3L, or 506 ci. Unfortunately, these big engines went into production just as the federal government’s demands for tightening emissions went into effect, forcing the manufacturers’ Band-Aid approach to meeting them. During the first half of its production, the 472 and 500 had a 10.25:1 compression ratio, but around 1971, compression plummeted to 8.5 or even 8.25:1. Power levels took a dive as well. Where once the mighty 10.25:1 engines made 400 hp and 500 lb-ft of torque, the lower-compression engines struggled to make 300 hp. To be fair, it’s a bit difficult to judge those numbers, because the switch from gross to net horsepower ratings occurred at this time as well. All you really need to know is these engines make torque—and lots of it. They make enough torque to make some diesel guys jealous, and they do it at low engine speeds—just like a diesel.

In spite of this, it’s reasonable to wonder why we’d bother building a 40-year-old engine at this point. The answer lies in the fact that we see at least one 472/500 engine every time we go to the junkyards. The engines are still available, they were made with good material, and there is a surprising amount of performance parts available for this platform, so as long as they weren’t abused, there is potential to make an impressive amount of power with one. After years of lurking, we decided to dive headlong into the world of these interesting engines and see what we can make of it. 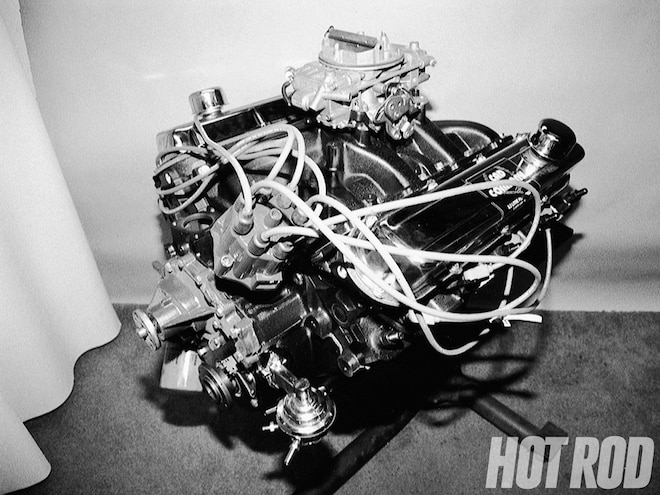 High-Torque Street Engines
Producing one horsepower per cubic inch has long been an ideal in the performance world. Remember Chevy crowing about its 283 fuelie motors making a like amount of horsepower in 1957? The more cubes you have, the easier it generally is to make torque and horsepower. So what better way to make power than with one of the biggest production-car engines of the modern era: the 500-inch Cadillac of the ’70s.

What better way, indeed. Larry Kruzick of Cadillac Motorsport Development (CMD) in Lakeland, Florida-“the originator of performance Cadillac applications”-posed that same question in the mid-’80s. Since then, Kruzick has become the Lux leader, making possible the swapping of hundreds of big-cube Cadoos into everything from street rods to musclecars to tow vehicles using a conversion kit he developed (“Anchors Away,” Aug. ’89). If anyone can do 500 torquey, bulletproof, streetable horsepower for a self-imposed limit of four grand, then Kruzick’s the man to pull it off with Cadillac style. Even though he’s protective of his secrets (don’t expect to have a casual conversation about how to build a stroker), he showed us the way to 500 leather-lined horsepower for cheap. Judging by the number of cool Cads that joined us on Power Tour this year, there’s plenty of interest among enthusiasts.

The part number is cast into the block at the top of the bellhousing flange, adjacent to the oil pressure sending unit. Other, more involved ways to find a 500 include measuring the stroke; at 4.304 inches, it’s about 1/4 inch longer than the 472 (4.060 inches). Pull the oil pan and check the crankshaft-500s have a small casting number (a 094 or a 793) between the No. 4 main and the rear rod journal. The 472 casting number is on the edge of the third counterweight.

To keep the dollar figures in line, we fudged with a couple of the popular items. The carb and big-block Chevy headers are parts easily available through your local speed shop bulletin board, engine shop, or racetrack newspaper. All other prices in our “Shoppin’ List” reflect those in the CMD catalog. Although you may find some non-CMD parts available through other sources for less money, chances are you’ll get a better deal overall if you buy the lot as a package from Kruzick.

The Cad 500 was created to be a torque monster. Kruzick knows that the stock valvetrain pieces tend to break at about 5,000 rpm. The rocker arm retaining rail and T-pedestals are vulnerable to valvespring pressure and, without reinforcement, can easily fail at that engine speed. While fixes like forged-steel connecting rods and reinforced rockers are available, and Cads can be coerced to 6,000-plus rpm, the cost of the components was prohibitive for our formula. Kruzick recommends revving a street Cad such as the one we built to no more than 4,800 rpm-well within the peak horsepower and torque bands.

Also, Caddy 500s had a negative-plenum intake manifold; that is, the intake was so low-profile that air had to move up through the runners and into the heads. This restrictive runner design costs power. Kruzick offers the PRO/Cad III intake manifold to take care of that failing. He also reports that, in non-Cadillac-bodied applications employing stock radiators, the engine has been known to overheat. So if you’re going to drop your Cadoo into a tight space, like an F-body, try a four-core radiator and a 2-inch spacer block to replace the fan clutch and keep the flow of cool air constant. Beyond that, our formula has a lot of what you’d expect to support more power from any engine: new high-volume fuel pump and oiling system, ignition, and so on.

Our results bear this out. For four grand, our 512-cube Cad pumped out 514 hp at 4,400 rpm on the dyno. Torque? Try a healthy 575 lb-ft at 2,600 rpm on for size, buster. Whether in a De Ville or a Chevelle, that translates to streetable, repeatable low-12/high-11 quarter-mile times. With uncommon class.

Staff member
the caddy v8 cylinder heads pistons and valve sizes changed several times, and in many cases are at least in theory interchangeable to some extent,
it is possible to get up to 11:1 compression changing / mis matching years on different various components

Only way to know for sure is to look at casting number in the crank which requires the oil pan to be off or measure the stroke by sticking something down a spark plug hole and hand cranking the engine.

70-76 the block casting ended in 5200 for both the 472 and 500. 70-74 500's only came in Eldos so if its got the oil pan with the rear sump, notch in it, and 2 drain plugs it could be a 500. The rest of the cars got the 472 and had the oil sump in the front (which would be backwards from a more typical engine like a Chevy. 75-76 all cars but the Seville got 500's. The Eldorado pan is the closest to a typical GM setup and over the years the Cad motors have been popular to swap into other cars and trucks so its possible that was what someone had done or planned to do with this motor so it could be a 472,500,425, or 368 with an Eldorado pan. Its also possible that an original engine was replaced with what ever was available at the time.

Block casting number is on the top leftish side of the flange where it butts to the transmission.
About where the distributor would be on a Chevy.

If nothing has been swapped around there are some visual clues to the year. They changed small things like valve covers and the breathers over the years. EGR started in 73. HEI distributor on some 74 and for sure 75. Electric choke started in 75. Intake was single plane and aluminum on the 425's and 368's. Timing cover slightly different on 425 / 368 vs the 472 / 500.

Picture of the intake carb pad, choke, and egr will narrow down the year. If you have the heads off the type of pistons could narrow it down. Head number can also narrow it down. Head casting numbers are on on the top side center on the smog rail which is between the rocker arms.

The small chamber heads were for the high compression engines. In 71 when GM mandated lower compression their fix was to put huge dishes in the pistons which was less than ideal for performance and emissions. Guessing they were hoping they would be allowed to return to high compression but when that did not look like it was going to happen they re designed the heads to use a more typical piston. Except for the 70 the difference in smog and non smog heads is just if the passage was drilled.

Only difference between a 472 and 500 is the crank and pistons. Everything else was the same including the firing order. Depending on the year there could have been differences like the oil pan if it was in a Eldo or a RWD car.

What is different about the 472-500-425-368 family was the #1 cylinder is on the right side, not the left like many other GM's. The firing order is also not the same as many of the other GM's of the era. I think the firing order is the same as the current LS engines. Supposedly some of the designers of this engine went on to Ford to do the 460 so the 460 has some similarities to the 472 family.
Click to expand...

That's a sneaky way to make the costs look better!

But... that is an impressive build.