Staff member
I've been trying to find if there is a link on this forum for Olds motors just like those posted for the Pontiac thread.
I'm trying help someone who may have been sold a bad deal.
I need to know how to id this Olds motor to varify if it is indeed a 455 from either 69 or 70 and if it's a factory 4 barrel. Hopefully I can get hp/ft lbs info too.

In 1975, the 260 V8 joined the Olds lineup as the new small block, and a year later the 455 was dropped forever. The 403 small block was to replace the 455 in its duty of powering the bigger bodied Olds and Cutlass series cars so optioned in 1977. It was not a Cutlass option in '78 and lived only through 1979. The long lived 350 was also dropped when the 307 arrived which became the sole surviving Oldsmobile designed V8 engine.

As the 330 grew, so did the list of cylinder heads used on its upgraded cousins. Although the basic design stayed pretty much the same, valve size, port shapes and combustion chamber volumes changed to meet the demands for more horsepower at first and cleaner air as smog restrictions tightened.

In the late '60s Toronado, marine and 442 heads were given larger intake valves (2.077 vs. 2.00) than the other big block cars of that period. In 1970 this trend continued on the G.T. version of the Toronado, the 442s and marine engines. In '72 the only big valve heads were found only on 442s with manual transmissions and all W-30 and marine motors. An interesting twist developed in 1972. Some 455s were fitted with 1.688 diameter exhaust valves instead of the 1.625 diameter valves that were normally used. These oversize exhaust valves were not used after '72 but can be used in other big intake valve heads.

The last big valve head was the KA which was listed as a marine, W-30 replacement and standard manual transmission head up to 1975 in the '83 Olds parts book.

Due to the firing order of Olds V8s, number 3 and 6 spark plugs fire in succession. This caused interference at the intake manifold crossover passage, disturbing the exhaust pulses for these cylinders. So Olds engineers had a small horizontal wall cast between the center exhaust port divider and the #3 or #6 port wall (depending on what side of the engine you face),closing off the passage to the intake manifold. Number 5 & 4 ports still fed heat to the passage for fast warm ups and these heads showed improved horsepower ratings; especially when exhaust headers were used. The second modification was the port shape just below the intake valves. Olds actually decreased the diameter of the opening just below the valve head. This created a venturi effect increasing flow with these heads.

How can you tell which heads you have on your Rocket? Two ways. All big block heads have a large (5/8" tall) letter cast next to #1 spark plug hole, A, B, C, etc. All small blocks have a large number in the same location, 1, 2, 3, etc. Olds heads also have a six digit casting number cast in one of two locations. Early heads had this number cast near the rocker arm assemblies which would require you to remove the valve cover to see it. Heads produced after 1969, including A, B, C and D heads, have the casting number on either side of the center bolt just below where the valve cover sits. This casting number location is visible with the valve cover in place. When buying D, F, or H heads look for the cast wall I described earlier and the second half of the casting number is also found on the combustion chamber side of the head. So be careful when purchasing these high priced heads by looking them over thoroughly.

Based on what I have learned, I've listed all the '64 -'90 heads. Thisï¿½may not beï¿½a complete list, so I need your help to finish it. If you have or see any other heads you can call or write me so I can add this information to the list and share it with all of you. 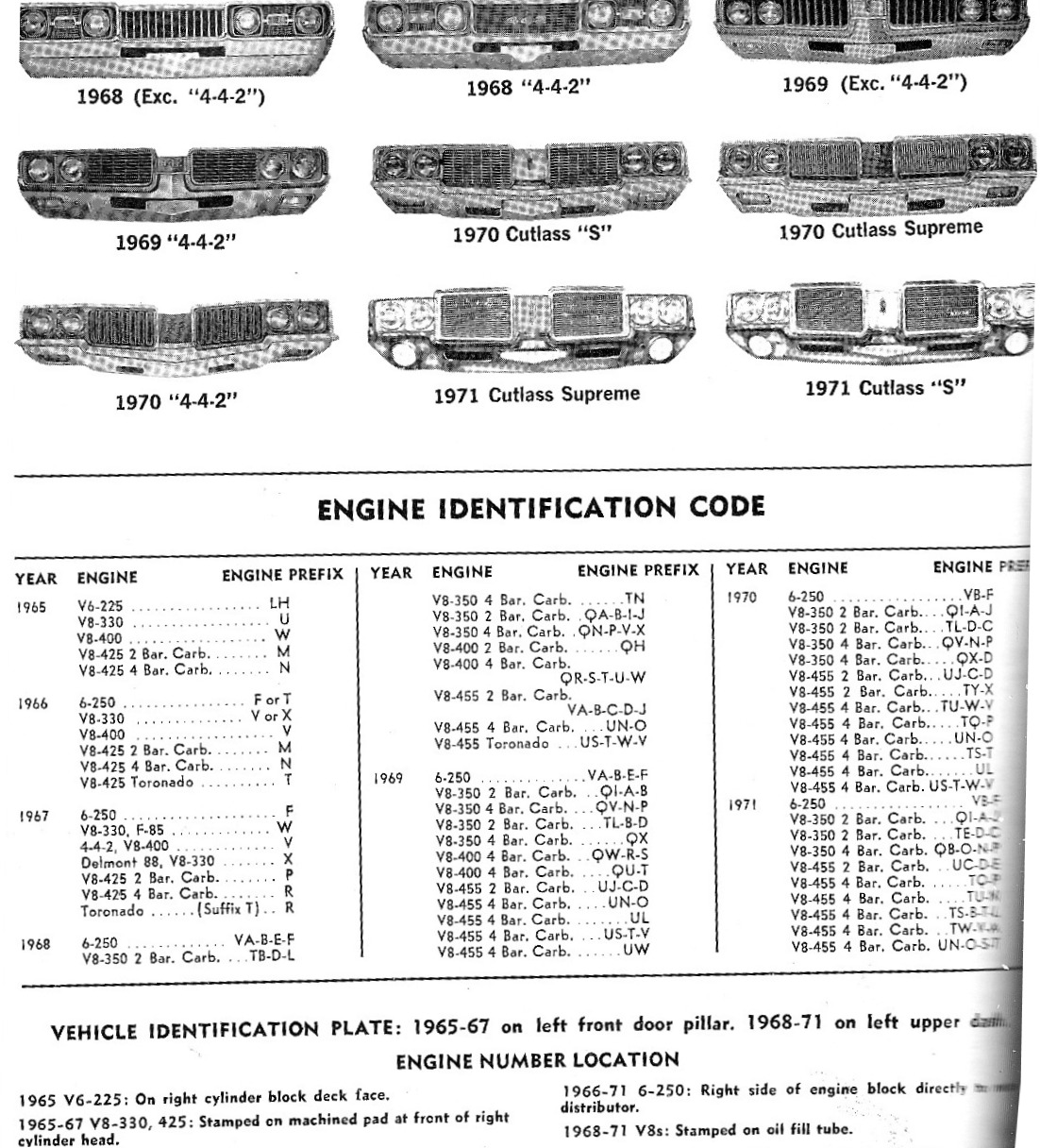 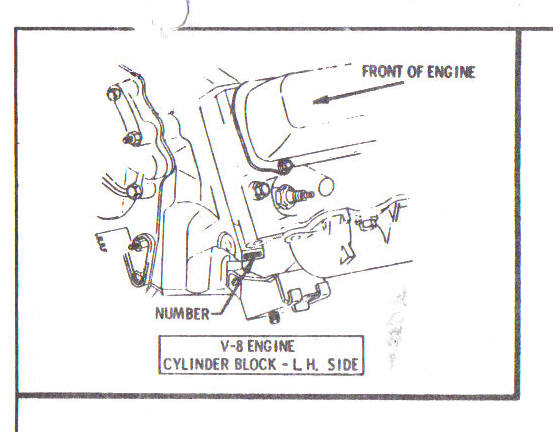 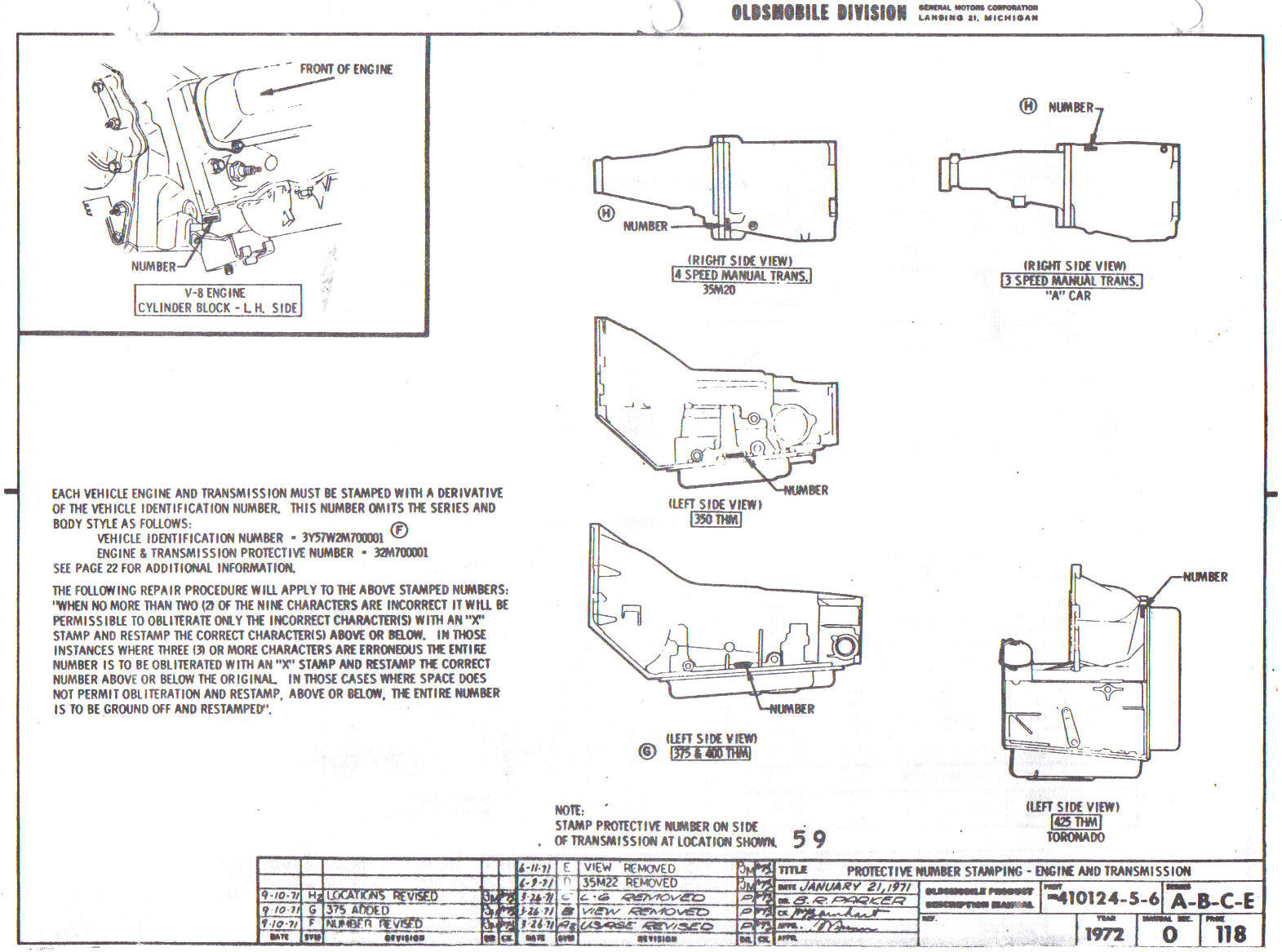 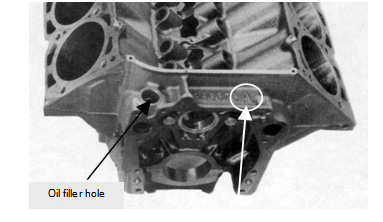 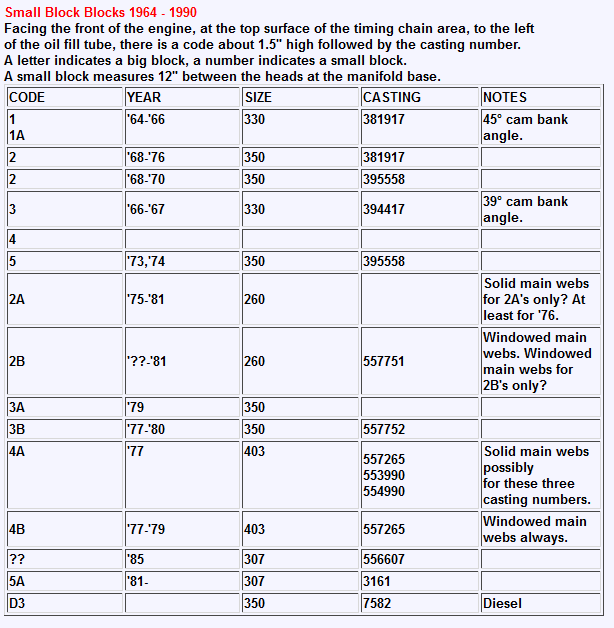 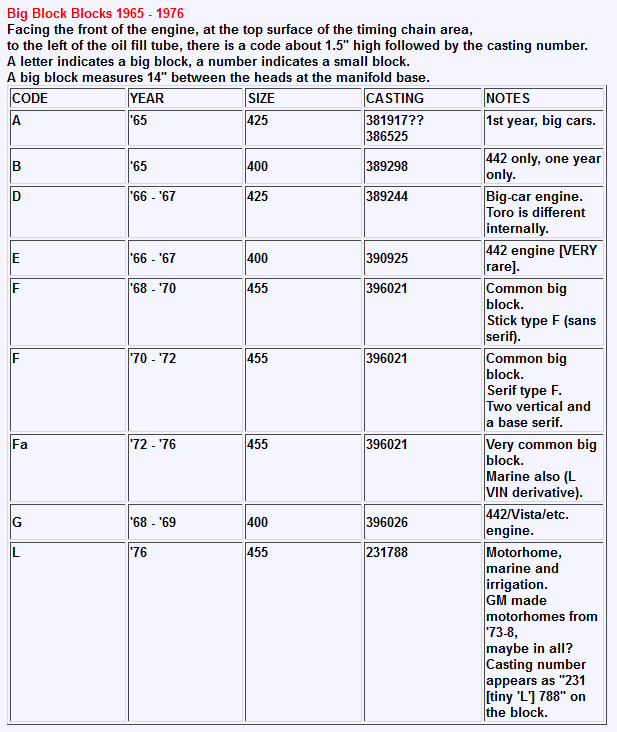 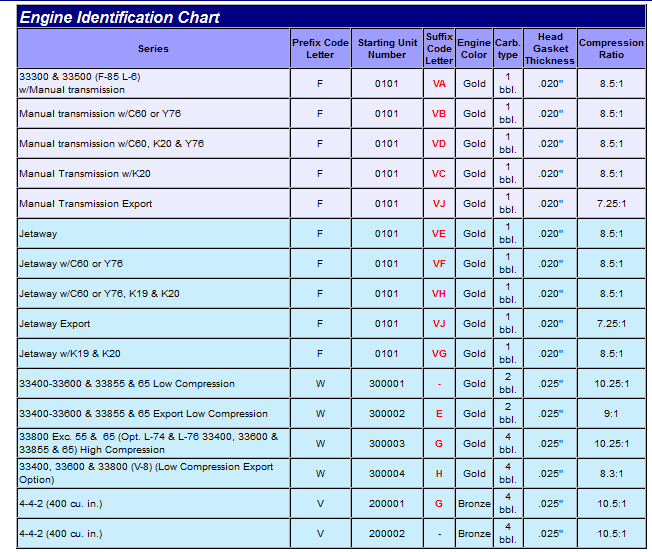 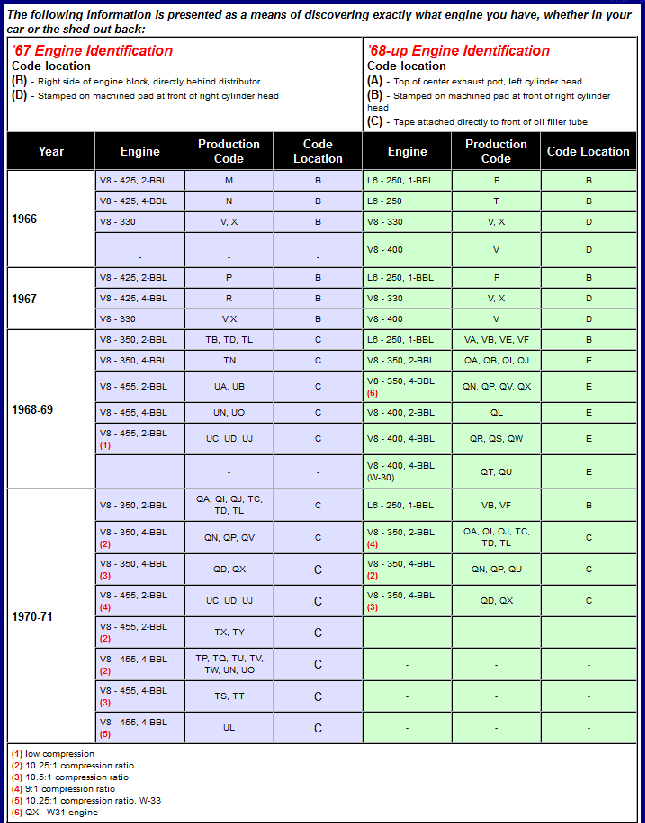 Some blocks, before 1977, have their ID cast above the right hand center freeze plug, eg. D for 425, F for 455. Olds didn't cast the displacement into the side of the blocks until they went to the light weight design in 1977. The 1977 and newer blocks will have the cubic inches cast in large raised numbers right above the right hand center freeze plug, eg. 403. The 307 will be in liters (5L), and a diesel engine will have the letters "DX" on it. The engine VIN letter will also be cast into the side of the block. Note that the 260 blocks sometimes have the last 3 digits of the casting number cast there, "355", which is rather misleading.

1968-later V-8 Engine
Have the last six digits of the VIN number, the year of the block, and the assembly plant stamped on the driver's side of the block below the cylinder head. A 2-letter code on the oil filler tube identified the engine.

3= Olds Division, E=1984 (year it was made) M=Lansing Plant 266131 is the last six of the VIN from which the engine originally came. As you indicated it's been rebuilt, I'm guessing someone probably replaced the engine in your 1980, 98 (which might have been a diesel when it left the factory - a lot of those were done around here).

Staff member
What happened to my post that was here yesterday?

Once again a home run! Thanks Grumpy! I searched the links I found on the net and didn't get good stuff like this, just PDFs and small block info. Great job putting this together.

Staff member
anything I can help with I try to do here!
8

I can post some of my Olds V8 sources tonight Richard.
Too hard to do from my Cellphone.
At Work now.

Got a question here for you guys. Been trying to get an interior kit for my 65 Old F/85. Manufacturer just told me that since I have a bench seat in the olds that nothing they have will fit. They say if I had buckets then they would have a kit for me. but no interior panels,rear seat,head liner will fit if I have a bench seat. Understandable the patterns would be different from the bench to buckets but surely they didn't make different doors and rear panels and rear seat just because you ordered buckets. Who has a bucket seat 65 Olds Post F/85/442 that they could measure the panels for me???They say I can buy the 442 kit but nothing will fit????
8

No one here has a 442 - F85.
Try looking on Classic Oldsmobile Forum.com.
Might want to join.
Network with other Olds Owners. 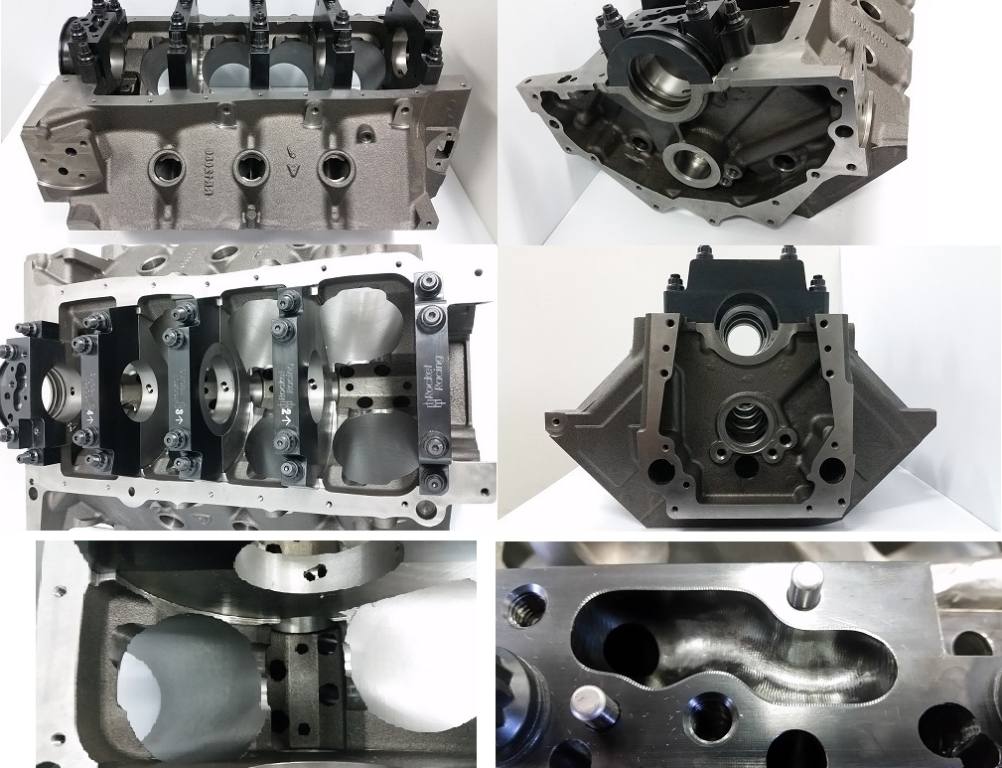