ok basically a 455 pontiac with forged pistons on an eagle rotating assembly, with the 4.25" stroke kit listed by ohio crank below 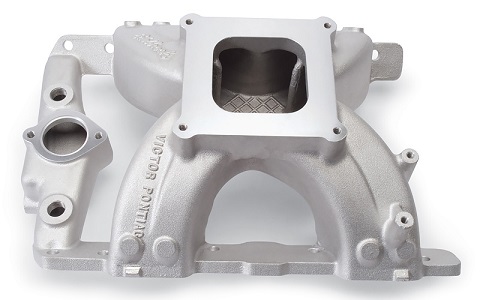 runs 12 flats consistantly in a 3300 lb firebird with a muncie 4 speed trans and a 3.36:1 rear gear ratio and headman headers ON STREET TIRES WITH ALMOST ZERO TRACTION
Last edited by a moderator: May 10, 2019

Staff member
IVE built very similar combos in the past, your correct it gives pontiacs a totally different feel, killer mid rpm power and a thousand plus more rpm than any stock combos likely to survive
, its the edelbrock heads ,far better than stock rotating assembly and that intake that allow the pontiac to breath and survive at far higher RPM levels than the stock components can survive,

I have the Isky Cam picked out Grumpy.
Thanks for the listing.
Too bad Wolverine is long gone. Had unique profiles for all makes.
Have a few of thier old catalogs.
Forgotten by all but us.

Staff member
I recently had one of the local guys come by the shop,with a 1967 pontiac firebird that he purchased to restore and hot rod, it originally had a 400 engine, which is what he assumed it still had when he purchased it, but after he purchased it he checked the numbers on the castings and found its current engine is a 326 v8.
the cars got a ford 9" differential with rear disc brakes and a muncie 4 speed manual so its got potential, the interior needs a great deal of work, the basic cars a dark metallic olive green but the front caps YELLOW , obviously from a different car. but he got the running and driveable car that has only minor rust for $6K so its not a bad deal.

its a combo of miss matched components, and the intake manifold appears to be the original 400 intake that originally had a quadrajet similar to this picture 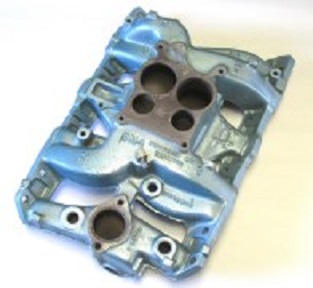 its rather badly rusted on the manifold water jacket cross over, from what appears to be low maintenance care,the previous owner not using antifreeze and only water so he had to replace the intake, water pump and radiator.
I suggested the intake be changed to the EDELBROCK design and a 600 -750cfm HOLLEY OR DEMON CARB, edelbrock single plane intake similar to this,
obviously the components selected and the drive train gearing will have a profound effect on the power curve , and where in the rpm band your engine makes its best power.
just keep in mind that the 2957 edelbrock intake pictured below is designed for operation in the 3500 rpm-7000 rpm, and while it will provide significantly more airflow and power if its matched to a cam with at least about 230 duration and heads like the matched edelbrock heads with some port clean-up,that can flow well in excess of 270 cfm at .600 lift at a cost of some lower rpm responsiveness 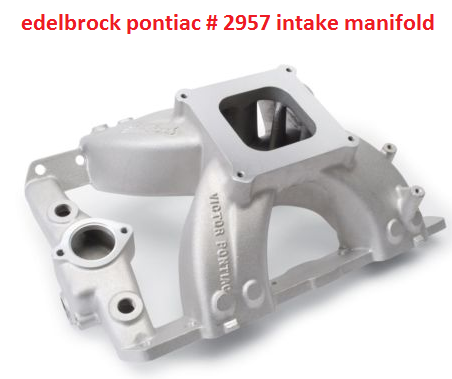 a factory quadra jet dual plane if carefully port match will actually produce superior torque and be noticeably more responsive below 4000 rpm with a stock cam, making it a better choice on a nearly stock engine and auto transmission with a stock stall speed converter. 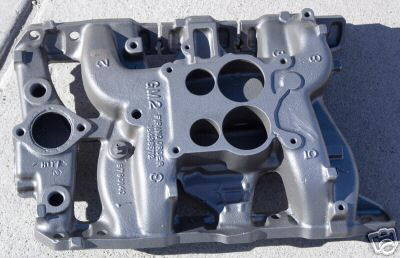 THE EDELBROCK PONTIAC VICTOR INTAKE IS THE BEST I'VE TESTED 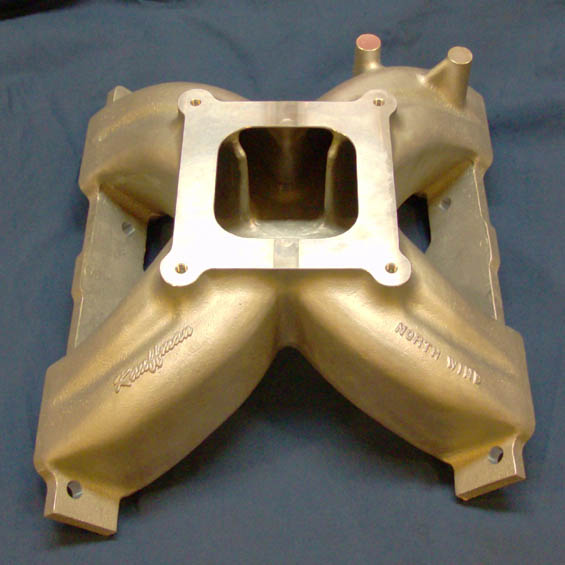 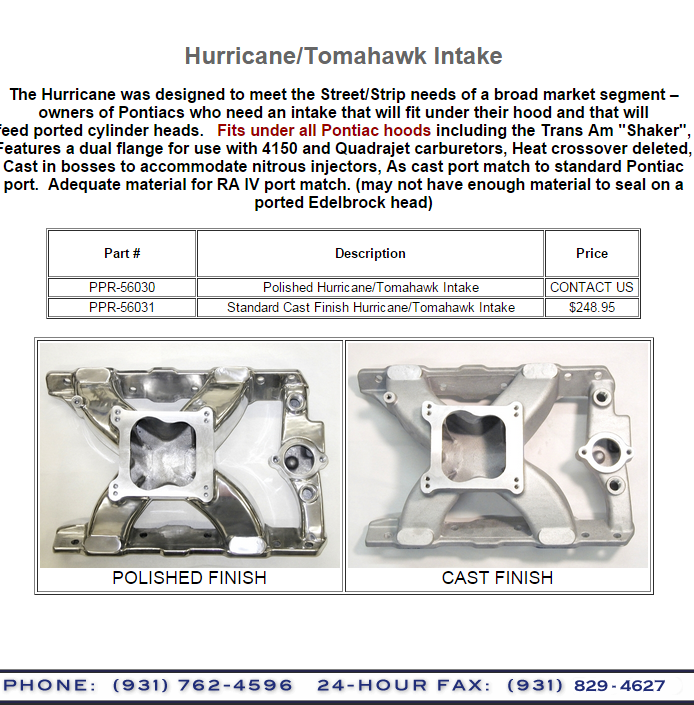 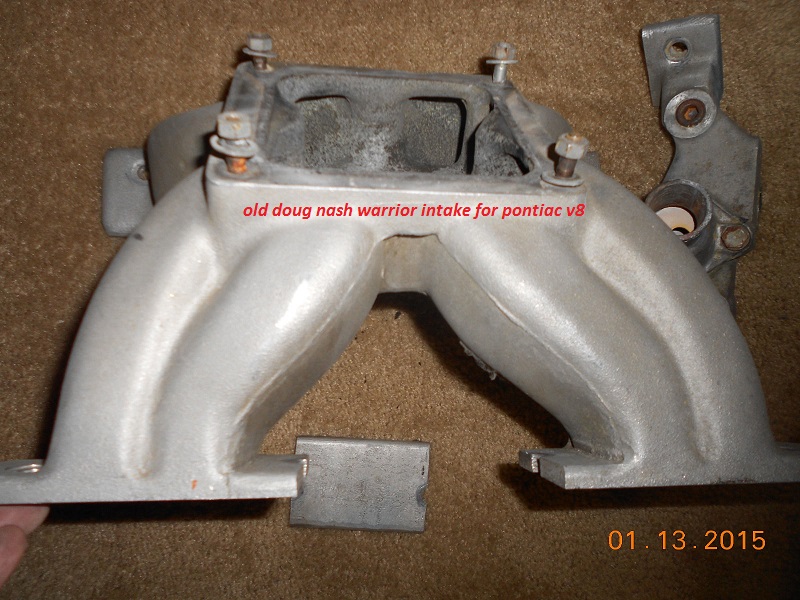 the main reason is it will support a good deal more performance and theres very little sense in buying a performance intake manifold that will restrict the engine hes currently building to replace the 326, ( a 400 like the car originally came with) but with 11:1 compression and a health hydraulic roller cam.
the heads on the current engine need a valve job, so hopefully he can get that done or ideally better heads.
most pontiac v8 engines look similar but there are differences so be aware that the earlier 370-421 parts may not always interchange with the 400-428-455 engines 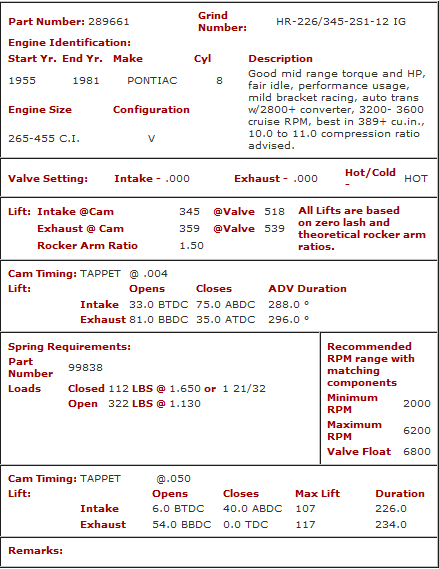 1981
Pontiac 301: BD, BJ
Pontiac 301 Turbo: BO, CJ
Chevy 305: D6A, D6B, D6D, DHA, DHB, DHC, DHD, DHF, DHH, DHJ, DHK, DHU, DHZDJ, DKB,
I spent decades of time building engines using salvage years as the source for the majority of the components ( I used, and recommended)
I also spent and still spend a great deal of time building engines for myself and others, with huge restrictions on component cost and time.
Brian may think I like to point out high dollar parts....
no I hate having to spend money, on parts especially if theres a perfectly good component you can get at a local salvage yard that will work perfectly well in the application,
that may cost less than 10%-40% of what the aftermarket part may cost.... but I think excellent long term durability is far more important than throwing something together fast and cheaply, that may not last very long If you do the research, and check everything the first time...if you , do things correctly and you don,t need too do it over.
I also built more than a few (several dozen 389,400,421, 428 Pontiac back in the 1960s-1990s, and several more in the last few decades
, or as the old saying goes.. if you can't afford to do it correctly, how are you going to afford to do it over when it self destructs after the original parts selected fail.

yeah it frustrating at times..

here is one area of reality, where the difference lies between the best vs the better ,
and the all too frequent .... guys charging an exorbitant amount of money for inferior work,
you know, exactly what I'm saying if youve ever dealt with skilled machine shops,
and the better mechanics, and all too often, scam machine shops, and fly by night operations, that pop up and go out of business every few years,
and why good machinist and knowledgeable engine builder's ,are so hard to locate, and most have long wait times , too get quality work done..
and why it almost always costs considerably more, and frequently takes longer to have some shops and race teams, work on your car or engine,
its also why many guys get rather pissed off, when they see what it costs for a top quality builder to build any engine.
and without doubt guys in some shops see what the best shops charge and think.. hell, if the best shop in my area, charges that much I should be charging a good deal more,
and I can knock that out for a bit less and in less time and make a killing...... and why finding a good machinist and machine shop is a real challenge in most areas.
I can easily suggest a cam , but its a rather meaningless gesture, and all too frequently a waste of time and effort for both of us.
simply because, without verifying the facts, and this is where Id say the vast majority of internet web sites,
and the recommendations, you see being posted in them, all too often, go wrong far too frequently.
yeah its easy to assume the timings correct the true functional compression, in every cylinder is nearly identical,
(most guys measure, two or three cylinders and without a second thought ignore the rest,
and thus they, blissfully assume all the other cylinders must be the same or so close its a waste of effort,
, most guys fail to put in the effort, too measure the less easily accessed cylinders, thinking
(why bother its a P.I.T.A. and if the first two or three are fine so will the rest of them, )
and that is the attitude that will be used for other factors, yeah, most guys, and every other guy reading similar threads on a vast ocean of similar web sites,
all over the internet, skip over anything that is redundant or takes a bit of extra effort, they simply assume they know things that may or may not be true.
the vast majority of guys , are absolutely convinced, that verifying every measurement and clearance issue in their engine,
in each cylinder is so close that they are effectively duplicate in all areas,
yeah without any doubt... its a waste of time and effort, too do what most guys, will just be convinced is busy work,
yes most tuners and car owners are just like the vast majority and are convinced everything between all the cylinders have not changed are exactly as you and they remember them too be..
especially if they have taken the time and effort too do things correctly several times in the past and found that to be true in the past.
thats the difference between the 5%-10% of guys consistently posting the best and most

consistent time slips and lap times vs the guys that frequently win a few races,
but over a season or two, don,t consistently, year after year build a good reputation, for durability and consistently winning.