Staff member
I watched the video above and its almost sure to open your eyes in how difficult it can be to stop a bear with a hand gun.
notice they stated they had a great many body hits fail to penetrate the bears vitals with the handgun ammo being used.,
yes both the 10mm and 44 mag have been successfully used to kill bears and successfully used in self defense
,Id point out , after reading years of reports,two basic facts are obvious,
your chance of being attacked or mauled is very very low,
and if attacked ,that in most cases you'll be forced into a very close range confrontation ,
under a very limited amount of time on a fast moving attacker,
Id doubt you'll have time to place more than 3 shot's maximum,
and your life might depend on the results of a single hits lethal damage.
personally Id prefer the 44 mag revolver with a 300 grain hard cast bullet over 21 grains of H110 powder,
but I would certainly not feel defenseless if all I had was a 10mm pistol,
there are 180-200 grain hard cast bullet loads over about 10 grains of blue dot, have worked well on hogs, and deer
(CHECK YOUR LOAD MANUAL)
keep in mind no handgun has near the stopping power of a 12 ga slug,
or a 45/70 or 450 marlin with a hard cast 400 grain bullet

keep in mind its a knowledge of the opponents anatomy,
your skill at accurately placing shots under stress,
and precise shot placement more than power or magazine capacity,
that makes ALL the difference

below some vaguely related videos


below some 44 mag related info, notice hard cast 44 mag revolvers far out perform the typical 10mm,
but realistically if your going to be shooting in a defensive confrontation,
you'll be lucky if you can get off more than 2-3 reasonably well aimed shots,
so magazine capacity .
while mentally it might be comforting its all but meaningless under real conditions.
as a defensive cartridge a 10mm is in my opinion close to ideal for a human opponent,
but it is certainly a bit less effective on a bear that might be significantly larger and much more heavily muscled.
I recently read of a fishing guide that carried a glock 10mm,
who was mauled and killed in ALASKA ,
they found he never got off a shot because,
he had never chambered a cartridge,
and he died with a full magazine.
witnesses stated he was attacked at very close range ,
unexpectedly , he drew his pistol but never got off a shot


keep in mind jacketed bullets are filled with comparatively soft lead thats designed to expand,
a hard cast bullet of a decent weight, for the caliber used,
like a 300 grain in a 44 mag or a 450-500 grain in a 500 mag will almost always ,
provide deeper penetration than jacketed ammo will in most targets,
you frequently find jacketed bullets under the far side hide on larger hogs , you will almost never see a hard cast bullet fail to exit.
realistically your chances of ever having to defend yourself from a bear charge is about as remote as getting hit by lightning.
but having the skill, having acquired that skill through constant, practice and use of decent equipment might save your life
hard cast bullets only expand slightly but tend to penetrate much further than softer jacketed bullets of similar weight,
every choice is a compromise in power, recoil , accurate shot placement and control.
your skill, speed, accuracy, dexterity and practice will matter
shot capacity is of very little concerned as you'll be very lucky
at the best of times, to have the time to get off more than one or two shots,
in a real charge at close range, but accuracy counts,
a well aimed 357 mag with a hard cast 170 grain bullet hitting center mass,
might be marginal
a 10mm, semi auto with a 15 shot capacity may sound impressive,
but if you only have time for one or two shots
, it may be a great choice but, a 44 mag with a bit more power ,
without the larger mag revolvers recoil, may be a better choice,
that /will easily out perform a 500 mag with 3 times the power with a grazing hit
it doesn't matter much if the bear dies a minute after reaching you, you'll
very likely be dead in under 15 seconds if he does!

while a lot of people seem to view the 10mm glock with hard cast bullets as excellent bear
protection (and yes bears have been killed using a 10mm) I think its marginal, but its also very easy to carry
personally I think your likely to only get one or two shots off,
if your using a glock or any handgun for defensive use in the field from things that claw and bite!
so Id prefer a 44mag or larger caliber revolver
where the 10mm excels is in personal defensive use on two legged
predator's, and the better designed 150-180 grain 10mm projectiles provide adequate penetration,
but if you hunt deer and hogs a 10mm loaded with those heavy 200-220 grain bullets,
are extra insurance, that you get the intended penetration reaching the vitals from odd angles
personally Id prefer a magnum revolver of at t least 44 caliber , if charged by a bear,
as I doubt youll have time to get off more than two or three shots maximum
but theres been several recent bear charge incidents where a 10mm certainly worked out.
Last edited: Aug 29, 2021
L

Yes, chances for most folks to have an adverse encounter with a bear are remote, unless you are a guide in bear country. While he did not use use a pencil, ala John Wick, Phil Shoemaker used his 9mm with success. I have met Phil and he is a cool customer.


keep in mind, that if you prefer a semi auto with a large capacity magazine,
the glock pistols in 10 mm have a 15 shot capacity and 30 shot glock mags are available,

a hard cast gas check bullet weight near 200 grains will provide both deep penetration
(mandatory for good results)(as is decent shot placement)..
and if you want reasonable velocity in a 10mm hand gun like a glock model 20 or 40
youll need to hand load ammo in most cases, if you want to keep cost reasonable,
as commercial 10mm heavy bullet ammo can easily cost $1.00 a cartridge
obviously a 6" 10mm barrel designed to use cast bullets helps


as always do the math and test your reloads,
for accuracy and flawless function,
if you graph out velocity vs bullet weight and test penetration,
and calculate energy potentially delivered to the target,
you want something in the 180 grain-220 grain weight range 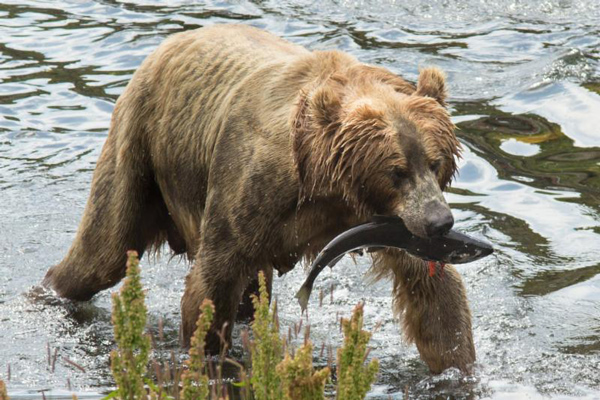 Defense Against Bears with Pistols: 97% Success rate, 37 incidents by Caliber

Using a pistol to defend against bear attacks seems to be a viable option.

Staff member
watch all videos,
interesting example of the huge difference a change in projectile type cam make in performance

Staff member
if you shoot a 44 mag or DAN WESSON 445 hard cast gas check 300-310 grain bullets pushed by 21 grains of h110 in a 44 mag,
or 29 grains of h110 in a dan wesson do a decent job on penetration and accuracy.
obviously shot placements critical to getting good rapid lethality, but heavy 44 caliber hard cast bullets are very effective,
keep in mind shots will be at very close range under stressful conditions