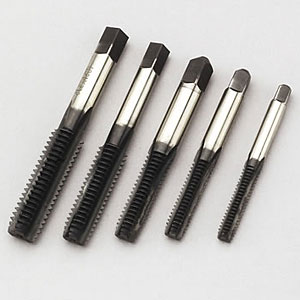 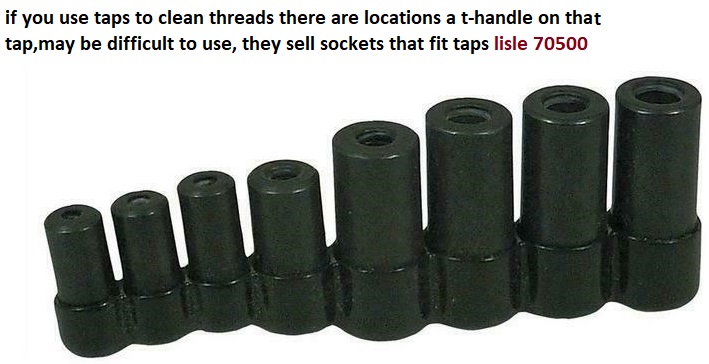 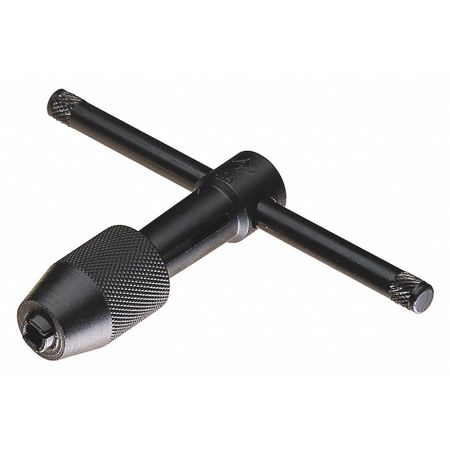 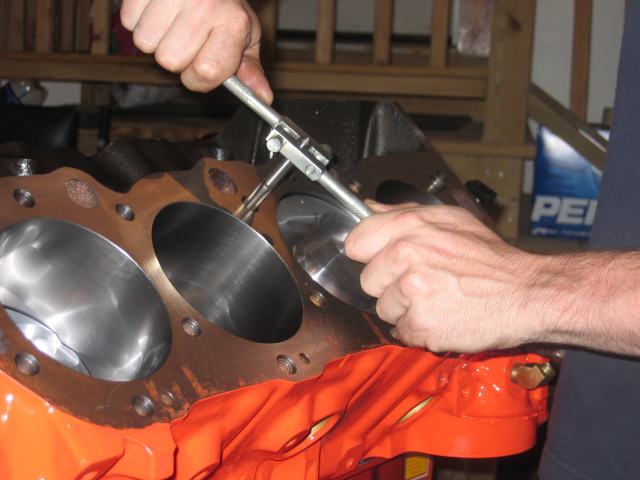 Lisle 70500 Tap Socket Set (this square drive socket set, socket set allows you to use swivels and ratchets on thread taps)
if youve ever chased threads in a block thats still in a car you have very likely found the typical taps T-handle can have clearance issues
https://www.amazon.com/Lisle-70500-...65953&creativeASIN=B0002SRFOE&m=ATVPDKIKX0DER 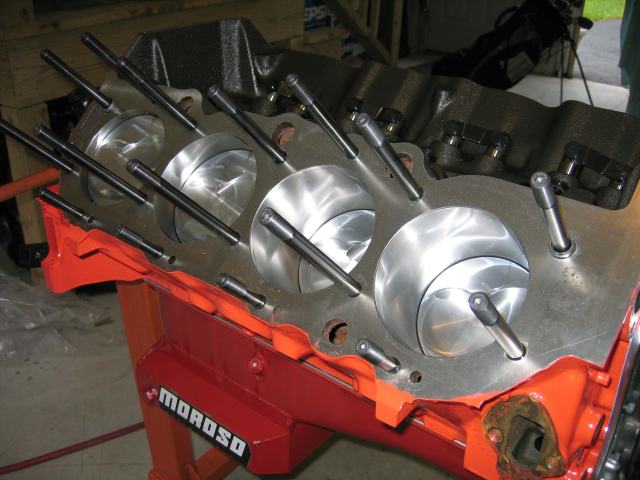 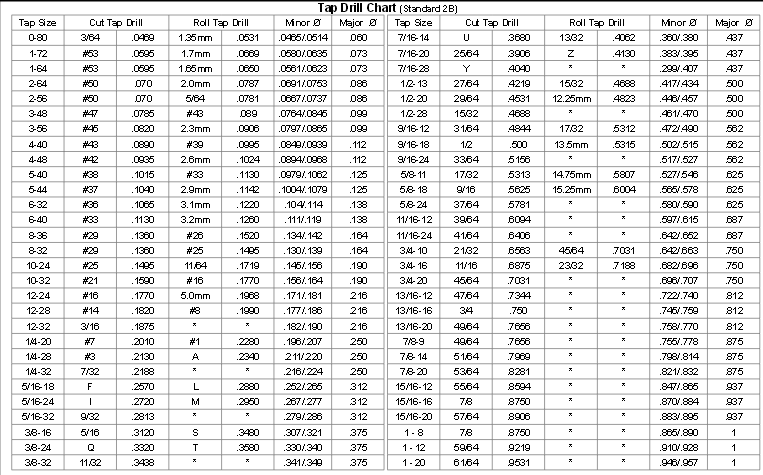 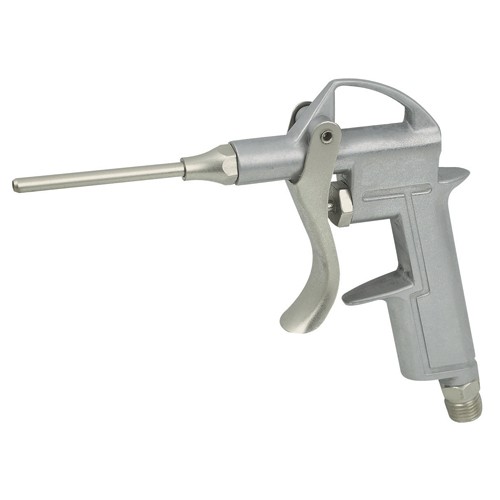 DON,T FORGET TO CHASE THE BOLT THREADS and VERIFY the BOLT LENGTH and THE threaded hole DEPTH exceeds the bolt LENGTH to prevent binding and stripping threads 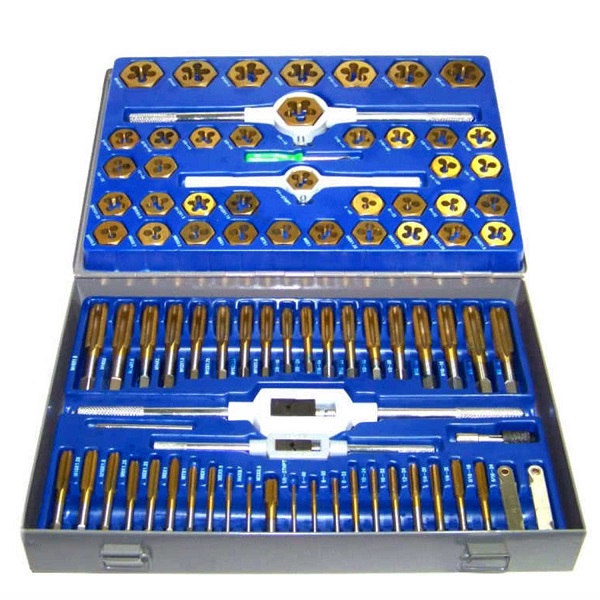 One neighbor of mine ,he found two rather extensive sets,SAE/METRIC TAP & DIE SETS MADE IN EUROPE NOT CHINA, at a yard sale,that were for sale, where a widow was moving after selling her home,
the garage was being cleared out, and it was rather obvious she had no clue what the stuff was,
that the tools had a bit of surface rust on only a few pieces and one or two missing pieces but he only paid a negotiated $130 for both sets.
I hope I can slip him a few bucks extra profit and get the stuff as he has as much use for it as a pelican has for snow shoes as he can,t and won,t,
even attempt to do an oil change, he simply bought the stuff because hes seen similar stuff around my shop and realizes its not cheap, and he got it at a bargain price. 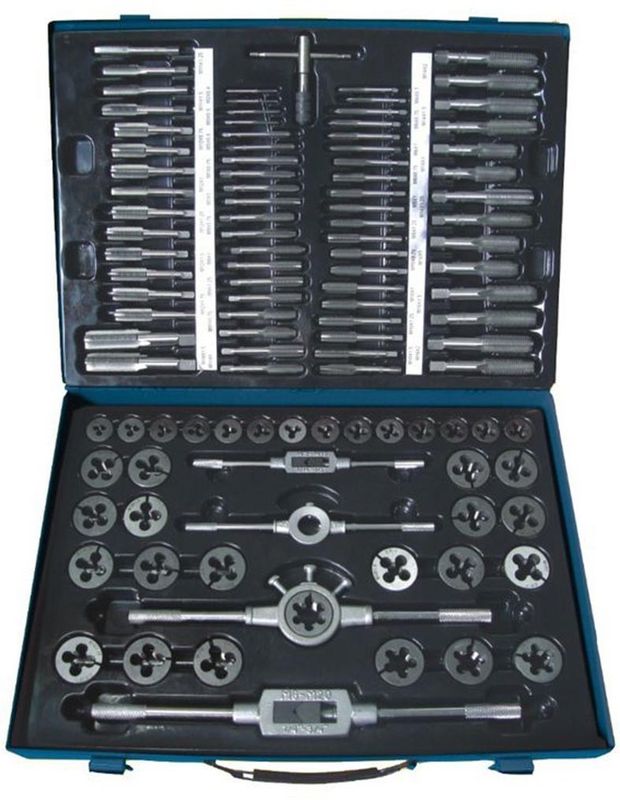 yes you'll eventually find these sets almost in-dispensable, you won,t use them daily but cleaning out threads before assembly and the use of anti-seize on threads will eventually become almost a habit

VERIFY THE BLOCK DECKS NOT WARPED 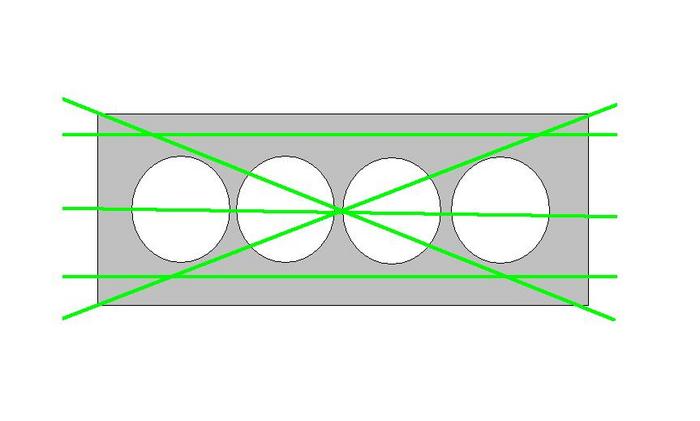 "there is a difference between a thread chaser and a tap. There are actually three types of thread cutting taps for each size threads. A taper tap is for starting the threads, the plug tap is for making the threads go deeper/closer to the end of a blind hole, and a bottoming tap is just that, for getting closer to the bottom of a blind hole. A thread chaser is made different from a tap in that is does not have the sharp cutting edges, the flutes ground into it are not as deep. A thread chaser is for straightening out or cleaning out threads in either an open hole or blind hole. The body of a thread chaser has more metal in contact with the threads already cut into a hole therefore reducing the chance of cross threading"

After lots of issues with an old Mark IV I decided to sell it and bought a new Dart Big M BBC.
Click to expand...


Had it completely machined and when picked up asked if everything went fine. Guy told me "we ran a tap on 3 main holes as the bolts were hard to turn giving incorrect torque readings.." I cringed... No chaser, a regular tap.

Finally took the block home after arguing and getting nowhere.. Whats done it's done I guess. Left it there for a while.

Last week bolted all mains up with the stock Dart bolts. Torqued up to 100 using darts lubricant. All OK, nothing felt funny and held up just fine.

Had a set of new ARP studs and installed those. Again torqued up in 3 steps to 110 as per ARPs instructions. All OK. Also clearances did not change at all with the studs, so will use these for piece of mind.

Returned to the shop, much to my regret, and got the taps dia measured. They are 0.012" larger than the studs dia.

Also measured the "side to side play" of the studs (without the main saddles on of course). Screwed them up all the way and then backed 1 turn. Measured as close to the main surface as possible. All of them move 0.0015" to 0.0025". The ones these ppl redid (the outer on the 3rd cap and the inners on 4th and 5th cap), have 0.003 to 0.004" side play (they of course felt "looser" just by feeling while screwing them on...

Now my question is: Should I leave as it is or fix it? I know the studs are clamping as they should, but once you spin a 75 lb crank to 6.000 or 7.000 rpm there will be a lot of punding down there, isn't it? So clamping force is one thing but I suppose the mains have to endure the extra forces a running engine will have... For (crossed fngers) a long time... This is not a race engine that will get torn down every weekend to check on things.

I have access to a nice large mill. Was thinking of drilling these threads out and inserting 1.25" helicoils tightly in place.. Am I overthinking this? So afraid to break up something I will never be able to afford again that I'm getting paranoid.

Sorry for the long post.. any opinions appreciated. If there's another way to check these holes please let me know.

as it is their block and their studs.
but I've used several DART big M blocks and dozens of sets of ARP main cap studs , and honestly, I don,t think your running any risk. 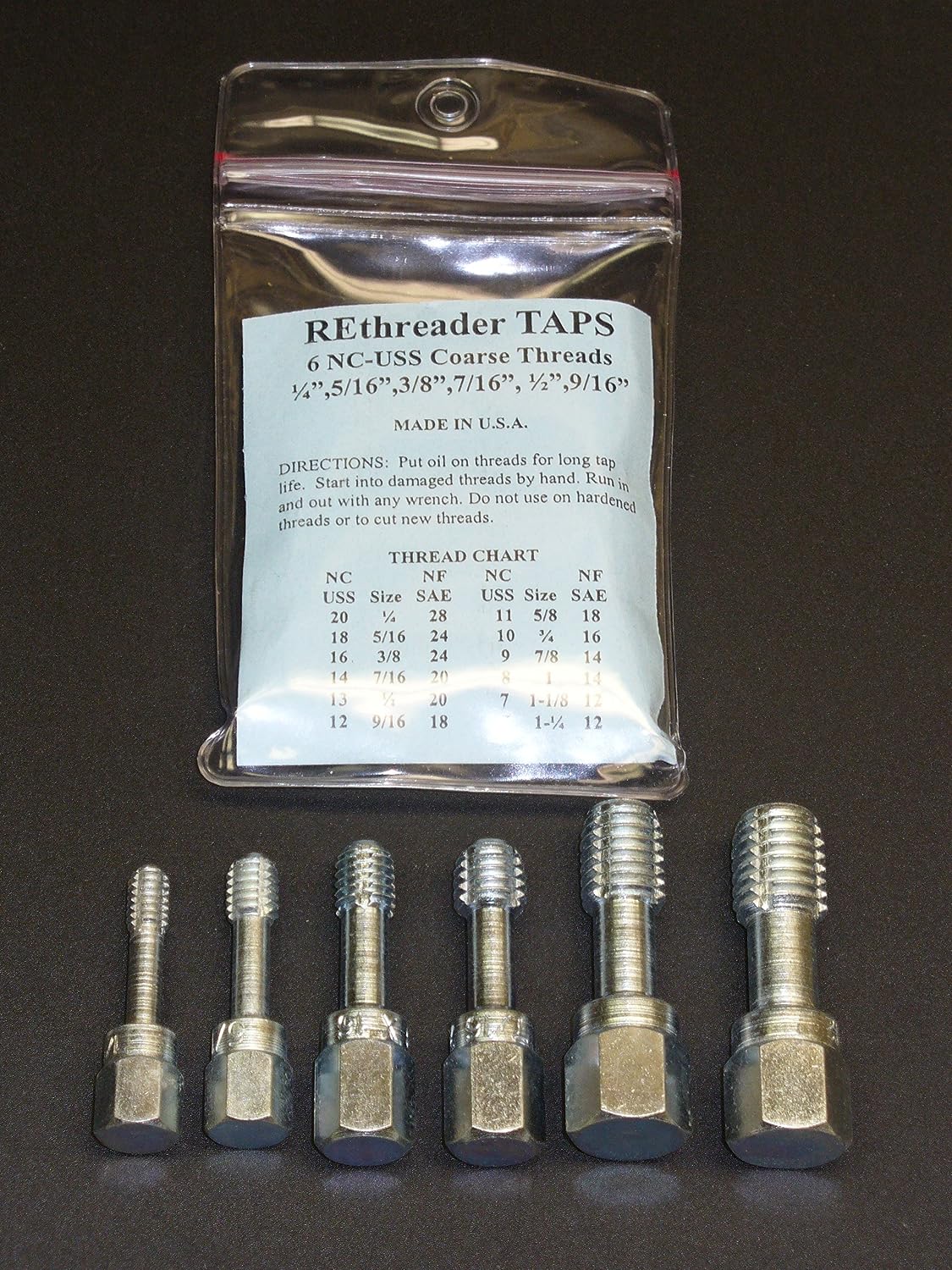 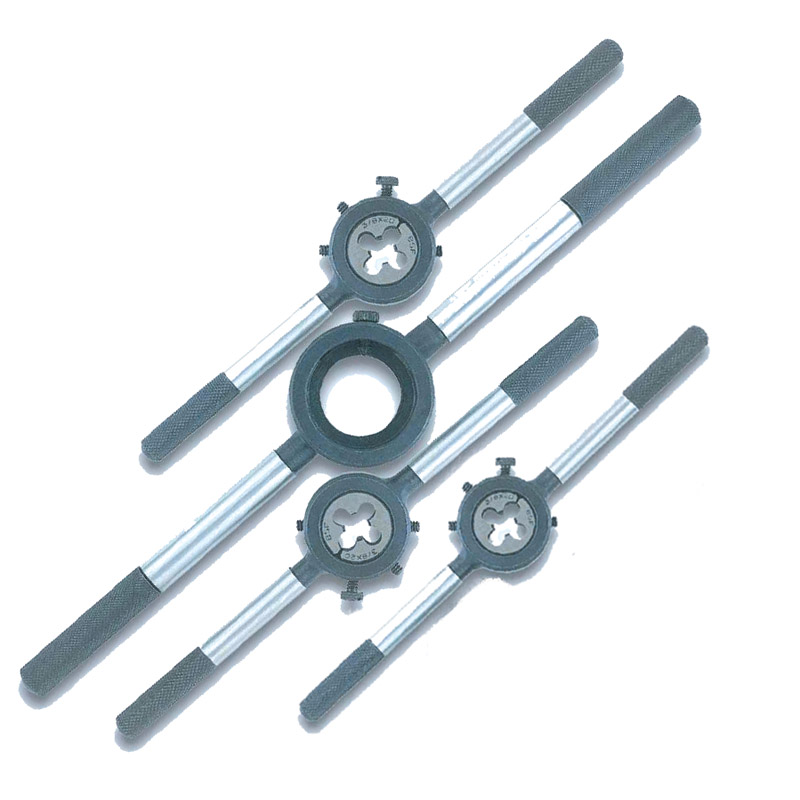 people and company's occasionally make mistakes, your always better off using a thread chaser on all the threaded holes and blowing out the debris with high pressure air so YOUR sure the holes are correctly prepped.
just remember that a thread chaser tap is not a thread CUTTING TAP
Click to expand...

If you can screw the bolt all the way in by hand, is not really a good indication of the thread conditions.....right???

I do have a set of tap and dies up to 3/4" from Sears that I bought 30 years ago and you are right, I do need these more often then one would think.

If I wasn't spending several thousand dollars already I would just buy the thread chaser without question. I just know from experience there will be many things that cost $20-$30 at the end of this project, that I hadn't even considered . These expenses usually add-up to several hundred dollars before it's all said and done.

It would also stand to reason that the greater the depth of thread, the stronger the tapped hole. This is true, but only to a point. Beyond that point (usually about 75% of full thread) the strength of the hole does not increase, yet the torque required to tap the hole rises exponentially. Also, it becomes more difficult to hold size, and the likelihood of tap breakage increases. With this in mind, it does not make good tapping sense to generate threads deeper than the required strength of the thread dictates.

As a general rule, the tougher the material, the less the percentage of thread is needed to create a hole strong enough to do the job for which it was intended. In some harder materials such as stainless steel, Monel, and some heat-treated alloys, it is possible to tap to as little as 50% of full thread without sacrificing the usefulness of the tapped hole.
Workpiece
Material Deep Hole
Tapping Average
Commercial
Work Thin Sheet
Stock Or
Stampings
Hard or Tough
Cast Steel
Drop Forgings
Monel Metal
Nickel Steel
Stainless Steel 55% - 65% 60% - 70% -
Free-Cutting
Aluminum
Brass
Bronze
Cast Iron
Copper
Mild Steel
Tools Steel 60% - 70% 65% - 75% 75% - 85%

% Of Thread Calculation for Cutting Taps

On page 1924 of my Machinery's Handbook (27th ed.), under the heading "Diameter of Tap Drill", they make the statement:
"Tests have shown that any increase in the percentage of full thread over 60 per cent does not significantly increase the strength of the thread. Often, a 55 to 60 per cent thread is satisfactory, although 75 per cent threads are commonly used to provide an extra margin of safety."
However, the table that immediately follows, Recommended Hole Size Limits Before Tapping Unified Threads, lists min and max hole sizes for various lengths of thread engagements. For 1/4-20 threads less than 1/3 diameter long (< .083"), the table calls for 87 to 100% thread depth. For thread lengths from 1½ to 3 diameters long (.375 to .750"), they call for 75 to 85%. I haven't checked any other sizes, but they don't seem to be following their own 60% rule.

At present, I'm dealing with 1/4-20 by 0.50" thread depth hole in 6061-T6. How big can I make the tap drill without sacrificing strength, assuming 0.50" thread engagement? Anyone know of any good references or on-line calculators to answer this sort of question?

Length of thread engagement is measured by the length of interaction between the fastener and nut member (i.e. nut or mating material for screw.) For example a standard thread forming screw applied in

10mm of material will have more length of thread engagement than the same thread forming screw in 8mm of material.

WHY IS THREAD ENGAGEMENT IMPORTANT?
Thread engagement is important because it directly relates to the integrity of the joint. With too little thread engagement (combination of length and percentage) the nut member may have a tendency to strip out at lower than desirable torques, in effect lowering the strip/drive torque ratio. On the other hand with too much thread engagement the torque needed to drive the screw will tend to be high, which can lead to inadequate clamp load or even breaking fasteners during assembly

Percent and length engagement can also be traded for one another; i.e. if the nut member material isn’t optimally thick, a smaller hole can be used to get a more optimal amount of thread engagement and in effect a better joint.

HOW DOES THREAD ENGAGEMENT EFFECT THE TENSILE STRENGTH OF A BOLT/JOINT COMBINATION?
Simply put, more thread engagement can result in higher tensile strength a joint. Tensile strength is the force required to pulls something until it breaks or the capacity of that material to withstand that load. If a bolt is longer than needed to develop full tensile strength in a nut member, that excess material is wasted. On the flip side, if there is not enough bolt length engaged in a nut member, the bolt has a higher probability of stripping out before full tensile strength capability is achieved. Generally speaking, you need at least 1-1.5 bolt diameter engaged in the nut member to achieve optimum joint strength with a thread forming fastener, depending on the strength of the nut material. There are different factors that affect this such as the nut material; steel is a close to a 1-1.5 relationship, while softer material, like plastic, will need more thread length engagement to achieve optimum joint strength.
Last edited: Jul 1, 2020
You must log in or register to reply here.
Share:
Facebook Twitter Reddit Pinterest Tumblr WhatsApp Email Share Link
Top