Staff member
just some info too think thru 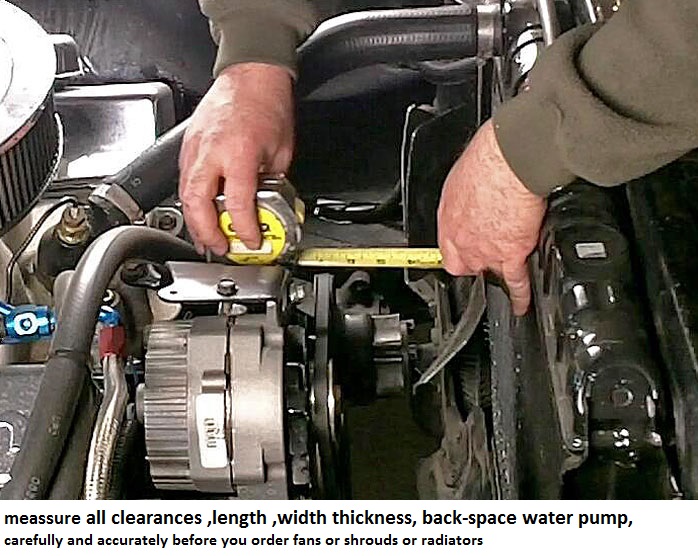 the type of coolant effects the rate heats transferred
https://durathermfluids.com/pdf/techpapers/pressure-boiling-point.pdf 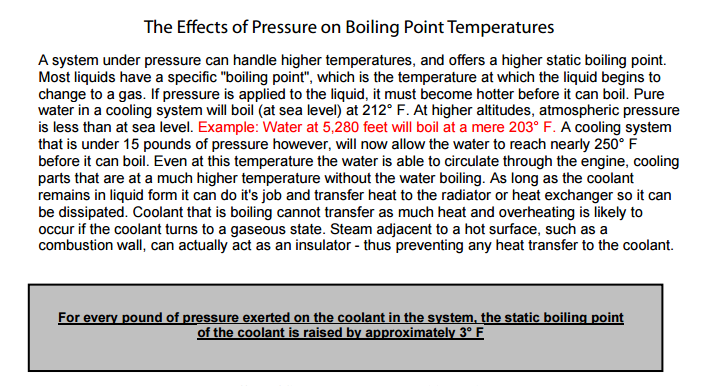 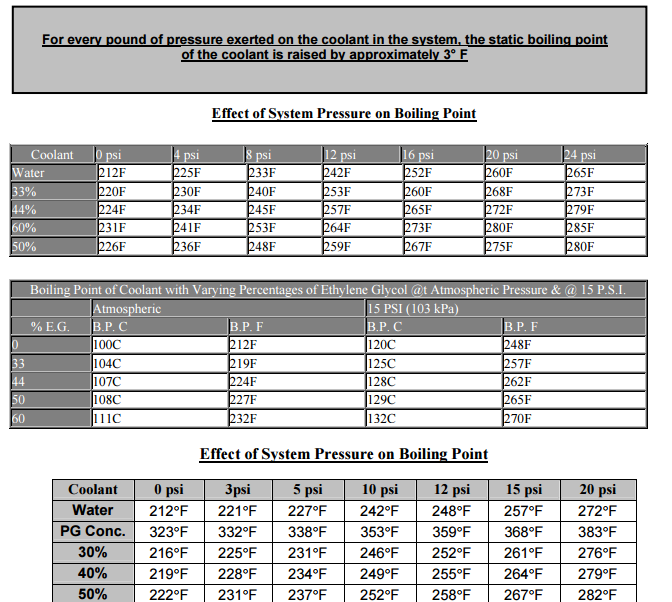 look thru, and read this linked info, the links help
oil does much of the initial heat transfer in the engine, keeping the oil cooled to no more than about 15F above the coolant temp, reduces the heat load on the radiator coolant, so adding a high capacity 7-8 quart oil pan and fan equipped, remote mounted oil cooler can dramatically reduce engine operational temps.

the amount and type of oil effects the temperature transfer rates

a larger oil filter, and larger capacity baffled oil pan, tends to reduce temps due to exposing a larger surface area to the air flow, keeping the average oil temp in the pan lower

anything that reduces airflow thru the radiator reduces its efficiency

the electric fans work off a sensor and the temp they turn on at can be modified, larger or additional electrical fans can be added

oil in the engine flowing over parts absorbs and transfers heat , having a larger baffled oil pan hanging down in the airflow under the engine helps cool the engine

the diam. of the pulleys your using does effect the coolant flow

running the correct T-stat can help cooling, generally the 180F-190F is the best compromise
most t-stats work by by having a thermo reactive wax that starts to expand at a set temperature , then over about 10F-20F it continues to expand,and allow heated coolant to flow to the radiator, thus the t-stat will remain closed until its rated temperature range is reached and it will open wider up to its fully open position over about a 2-5 minute time frame
http://www.digitalcorvettes.com/forums/showthread.php?t=81691


Ideally I try to keep engine coolant in the engine in the 190F-200F range but don,t get overly worried below 230F. BTW I run a 190F t-stat, temp ranges should be kept within these ranges or the wear and emissions won,t give you the long engine and trans life and low emission levels you expect , drop the coolant temps lower and you may gain a few hp but the wear tends to get worse as the fluids can,t operate correctly, drop the oil temp below 211 F and acids can form in the oil (bad for bearings) 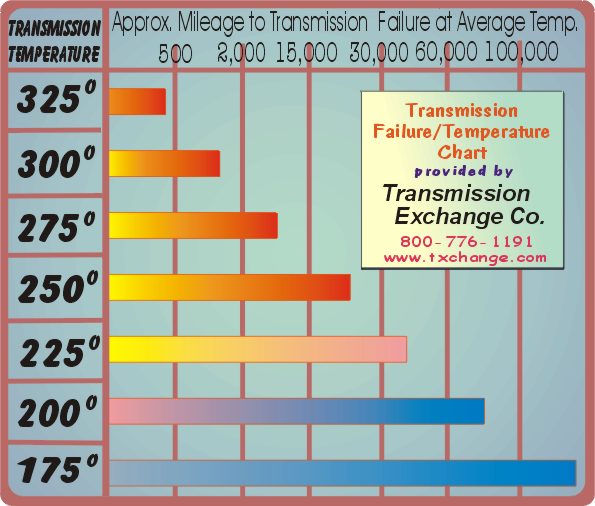 in an ideal world the coolant temp would stay in the 190F-200F range, install a 180F-or-190F t-stat and have the fans re-programed to come on at about 185F-200F and you'll see a marked stabilization of the coolant temp IF everything's functioning CORRECTLY,and your using a decent radiator and water pump. but Ive found that drilling 5-8 3/32"-1/8" holes in the flange of a 195F t-stat gives most engines the best results, keep in mind coolant temps generally are about 10-15 degrees lower than OIL TEMPS and you want those to remain in the 210F-220F range most of the time once the engine at operating temps.
the holes prevent air from being trapped under the T-stat and allow minimal coolant flow while the t-stats closed, the result is a very stable coolant temp range and personally I can,t see why the t-stats don,t come factory drilled that way unless its due to emission testing

personally I selected the 190F T-stat 185F fan control , but IM seriously thinking of getting the 200F fan control simply because with my external trans cooler the engine oil temp seldom gets over 220F and it takes 215F to burn off all moisture in the oil.

on my corvette I felt the proper route was hot transmission fluid out to radiator then to the electric fan cooled trans cooler then back to the trans, simply because that maximized the temp drop to the trans AND I was not having ANY trouble cooling the engine, in fact the oil temp seldom exceeds 230F and takes a fairly long time to reach 215F.
I don,t know the trans fluid pressure but I did verify that my trans cooler was designed for transmission heat/pressure and was factory tested at 300PSI. BTW if you route the other direction, IE separate trans cooler first then to the radiator it makes for a significant reduction in coolant temp, and the fan on the separate transmission fluid cooler runs constantly, but the engine coolant has a difficult time getting up to temp,(at least on my corvette) of reaching or allowing the oil temp in the engine to reach 215F LETS NOT GET INTO HOW I KNOW THAT :laughing:
btw some common areas people SCREW-UP

(1)
theres TWO different types of water pumps, most serpentine belt water pumps are REVERSE ROTATION compared to the standard SBC water pumps and of course wont work correctly if they get installed in an application where they spin in the wrong direction
(2)
some head gaskets have significantly smaller than standard water flow passage holes that significantly restrict coolant flow rates to the heads, youll need to verify your useing the correct gaskets
(3)
your ignition timing has a huge effect on the engine temp, verify its close to correct, on both total timing and it advances smoothly as the rpms go up.

(5) air flow thru the radiator is critical, make darn sure theres no crud blocking the radiator fins, CLEAN IT FREQUENTLY with soapy water and a hose it takes surprisingly little mud or grass stuck in the fins to significantly raise temps and you won,t be the first guy to have a plastic bag or paper or leaves sucked up and blocking the air flow

(6) T-stats can go defective, Id advise using a known brand in a 180F-190f RANGE, and type , not the cheapest crap you can find

BTW I normally drill 8-10 equally spaced 1/8" holes in the flange of the corvettes t-stat all around the perimeter this allows coolant to flow even if the t-stat locks closed and prevents air trapped under the flange, the picture below is of a semi similar mod on a different cars T-stat, yes it takes longer to reach full temp, but Ive found no down side and it works better with this mod in my opinion 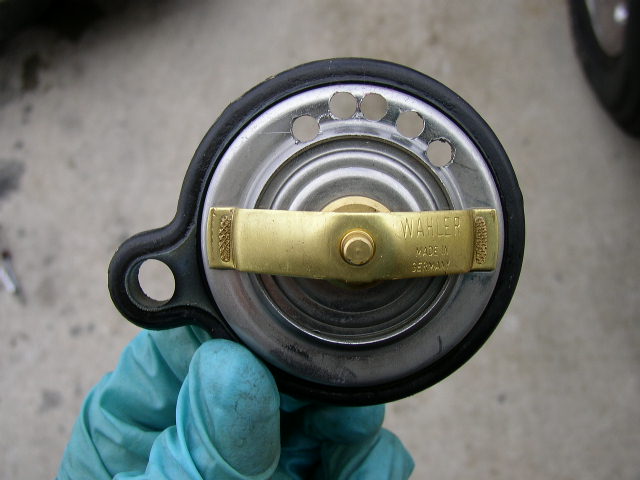 (not a Chevy T-stat)
Ive always found that drilling 6-8 evenly spaced 1/8" holes in the T-stat flange tends to help similar problems, that way you get flow at all times, and while its true the engine takes a bit longer to reach full operating temps its also less likely to over heat, personally I can,t see why they are not a factory supplied feature


BTW placing the edge of the t-stat on a 2x4 and useing a drill press for drilling thru the flange is far simpler/safer than trying to do that with a portable drill by hand
I generally arrange the 6-8 3/32" holes spread around the flange equally spaced, the t-stat still controls the temp to a large degree but its not as likely to cause rapid changes in temp swings as cooler water or anti-freeze is not totally trapped behind it until it opens 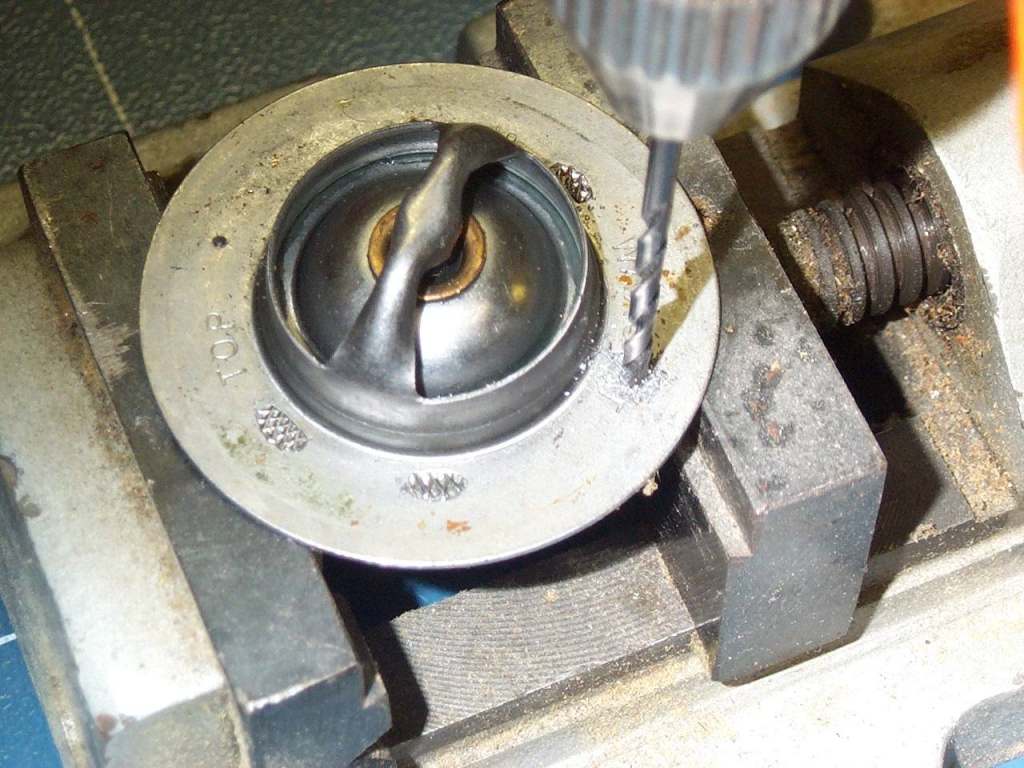 now IM sure some guys will say that defeats the T-stats purpose but it still works and theres a noticeable increase in coolant flow at 190F when the t-stat opens so I feel its a no lost deal
Last edited by a moderator: Aug 18, 2017

If your engines running hotter than you prefer it too..the first step is looking for the cause of the extra heat, and vacuum leaks and ignition timing and a lean a/f ratio, or low coolant levels or a restrictive t-stat, are certainly suspect! the guys are correct in that both a puller fan added to the push fan currently installed,and an electric fan equipped oil cooler will do a great deal to remove heat from the engine.

Ive been building engines for over 40 years and yes I fully agree some gaskets suggest installing them dry....I spray both sides wet with copper coat and have yet to have problems with them sealing, keep in mind the vast majority of head gaskets don,t "LEAK" they get damaged by "OVER HEATING" or "DETONATION DAMAGED" then when they fail, its blamed on the "HEAD GASKET FAILURE" THATS A BIT LIKE BLAMING FLYS for CAUSING GARBAGE

but if you don,t have at least a 7 qt capacity oil pan your over looking a good tool to keep temps ;low, remember oil flow absorbs and transfers a great deal of the heat in an engine and keeping the oil at about 215F does a good deal of the cooling, far more than many people realize theres also high capacity aluminum 1" tube radiators that are far superior to the stock radiator

btw this info may help
http://www.gates.com/brochure.cfm?brochure=1022

Hi there, So I'm looking for guidance regarding how to choose an engine oil cooler. I don't want to get one too small or I guess too large. I looked through the threads in part of the forum but did not find anything that popped out at me that I could use to help me. Any guidance or references...
garage.grumpysperformance.com
Last edited: Jun 5, 2022
You must log in or register to reply here.
Share:
Facebook Twitter Reddit Pinterest Tumblr WhatsApp Email Share Link
Top