Staff member
now I posted a thread concerning oil mods that tend to help durability so I figure I may as well point out a few that don,t generally work too your advantage but have some shops promote their use, because roller rockers and roller lifters can function with lower oil flow levels.
the idea behind lifter gallery vents is to significantly reduce oil flow rates, of the oil returning to the engine sump being effecting by the spinning crank assembly, and forcing the returning oil to drain only at the front and rear of the block, from the upper lifter gallery and cylinder heads, which at least in theory reduces the amount of oil the rings must deal with and the drag on the crank at higher rpms. both in theory can reduce the power lost to friction, or pumping losses.
Be aware, that if your going to restrict the size of your engine oil pan capacity to 5 quarts or less theres some concern over keeping enough oil in the sump to maintain oil over the oil pump pick-up under both high rpms and high inertial loads , (especially in circle track or road race cars)that tend to move the oil away from the oil pump pick-up, but if you use well designed a 7-8 quart baffled oil pan with a windage tray, that forces returning oil back into the sump, these concerns are mostly groundless 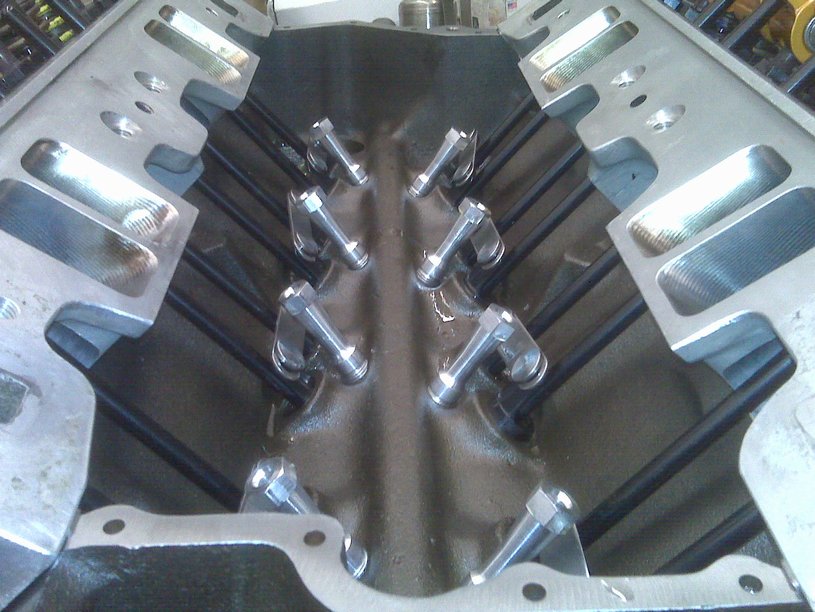 oil gallery restrictors limit oil reaching the lifters , they are generally inserted in the rear lifter gallery oil passages in place of the normal plugs which don,t extend nearly as far into the oil passages, the restrictors are there to limit oil flow to the lifters,and can NEVER be used with hydraulic lifters but in theory can be used with solid lifters the idea is to maximize available oil flow and pressure available to the bearings and minimize oil flow returning from the lifters and rockers the fallacy hear is that the reduced oil flow results in significantly increased valve train wear and reduced valve train cooling, which in theory is not a huge concern on a drag race engine used for only 60-90 seconds at a time and much of that not under full power.
but the truth is that valve springs heat rapidly and without a constant bath of cooling oil can reach temps where they loose much of there strength

http://www.summitracing.com/parts/mor-22010/overview/
your generally better off controlling and directing the oil flow in an engine with a windage screen and crank scraper and baffled 7-8 quart oil pan, and if anything increasing oil flow rates that cool the rockers and valve springs 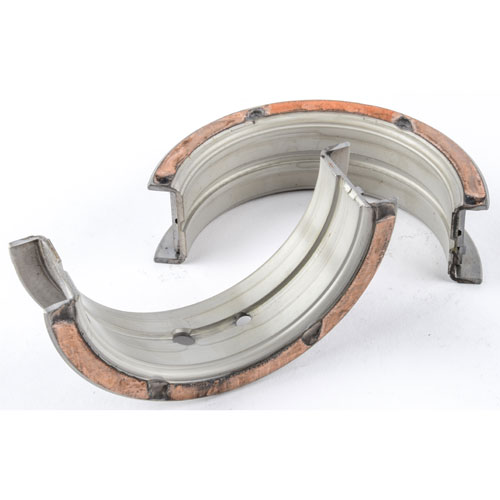 TB 2051 2/10/2000
Influence of Grooving on Main Bearing Performance
Various forms of main bearing grooving have been used over the years. We are
frequently asked what difference grooving makes.
First, it’s essential to understand that bearings depend on a film of oil to keep them
separated from the shaft surface. This oil film is developed by shaft rotation. As the shaft
rotates it pulls oil into the loaded area of the bearing and rides up on this film much like a
tire hydroplaning on wet pavement. Grooving in a bearing acts like tread in a tire to break
up the oil film. While you want your tires to grip the road, you don’t want your bearings
to grip the shaft.
The primary reason for having any grooving in a main bearing is to provide oil to the
connecting rods. Without rod bearings to feed, a simple oil hole would be sufficient to
lubricate a main bearing. Many early engines used full grooved bearings and some even
used multiple grooves. As engine and bearing technology developed, bearing grooving
was removed from modern lower main bearings. The result is in a thicker film of oil for
the shaft to ride on. This provides a greater safety margin and improved bearing life.
Upper main shells, which see lower loads than the lowers, have retained a groove to
supply the connecting rods with oil.
In an effort to develop the best possible main bearing designs for High Performance
engines, we’ve investigated the effects of main bearing grooving on bearing performance.
The graphs on the next page illustrate that a simple 180° groove in the upper main shell is
still the best overall design.
While a slightly shorter groove of 140° provides a marginal gain, most of the benefit is to
the upper shell, which doesn’t need improvement. On the other hand, extending the
groove into the lower half, even as little as 20° at each parting line (220° in total), takes
away from upper bearing performance without providing any benefit to the lower half.
It’s also interesting to note that as groove length increases so do Horsepower Loss and
Peak Oil Film Pressure which is transmitted directly to the bearing.